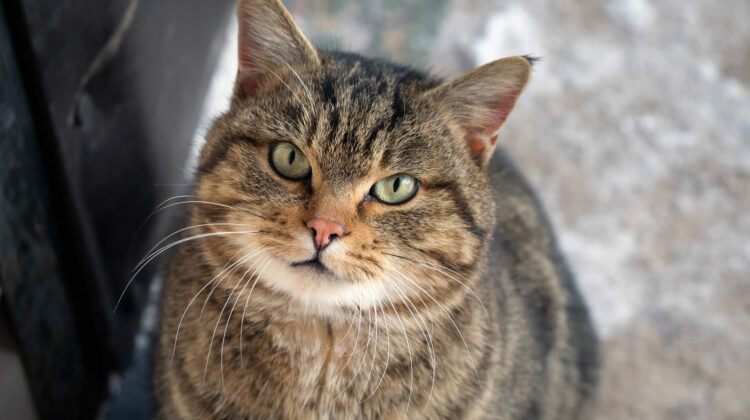 Technically speaking, males don’t go into heat. While female cats cycle through being in heat and not, males are permanently ready to mate at any given time. However, we can still pick up on strange behaviors in male cats during mating season, usually because they can sense a female nearby.

This can make male cats difficult to live with! Their sexual excitement can be a lot. Like females, males can vocalize excessively, beg to go outside, and act more affectionately towards people and cats. Here I discuss more about why this is and how you can calm your frisky male down.

What is Heat in Cats?

First thing’s first, what is heat? This is the term used to describe a fertile cat that is ready to mate. It is also known as cats coming “into season”. When cats are in heat, mating will nearly always result in pregnancy and a litter of kittens being born a few months later.

Cats will only go into heat once they have reached sexual maturity. In cats, sexual maturity happens at a pretty young age. But at exactly what age can a cat get pregnant? Well, females will reach sexual maturity at the age of four months and will start going into heat cycles from this age. This means your cat could still only be a kitten itself when carrying a litter of her own!

On the other hand, males take longer to become sexually mature. This is just one of the differences between male cats vs female cats. They will only reach full sexual maturity at the at of 6 to 12 months old. Only at this point will they become fertile and be able to impregnate a female cat.

Do Males Cats Go Into Heat?

Once a male cat has reached maturity, he can mate with a female cat at any time.

I guess you could say he is permanently in heat for his entire adult life, rather than going “into heat” at different points in the year.

The opposite is true for females though, who go in and out of heat cycles when in season. After females have reached sexual maturity, they go into season from February to October. This is usually when I see my cat shedding so much as the days get warmer. Indeed, longer and hotter days can stimulate reproduction and cause cats to go into heat.

Within these few months, cats will have several heat cycles. These are periods 2-3 weeks apart during which females are looking to mate. In fact, they search relentlessly for a mate!

You can easily tell your female cat is in heat because you will notice some of the following symptoms:

Despite not cycling through heat cycles, you will notice behavior changes in male cats once they reach sexual maturity. Because tomcats are fertile for their entire adult life, these behavior changes will be permanent, unlike with female cats who will show symptoms of heat intermittently during mating season.

Some of the signs of a male cat reaching reproductive maturity include:

During mating season, it’s common to see these signs of male cats in heat become far worse. This is because they can sense fertile females nearby. They’ll be able to hear them calling out and smell their pheromones, signaling they’re looking for a man. Sensing these active females nearby can make your male cat even more insistent on finding a mate. They’ll become louder, pushier, and more aggressive.

How to Calm Down Male Cats in Heat?

Living with a cat during mating season can be extremely challenging.

You’ll undoubtedly have to clean up urine that your cat has sprayed around your home to signal to the females. That’s before we mention the pushing and demanding behavior. Plus, there are loud vocalizations that will be extremely disruptive and keep you up at night.

Here are a few ways that you can help to calm down your cats and ease these behavioral changes during this difficult time:

While your cat is looking for a mate, you will want to isolate them from other cats. Although you have a male cat and won’t end up with an unexpected litter of kittens at home, unplanned pregnancies can have complications. Besides, there are far too many cats in shelters already so it is best to not add to the growing issue.

If you have an outdoor cat, ensure you keep them inside during mating season. Indoor-only cats can be extremely happy, so long as you provide plenty of entertainment. I’m talking scratching posts, cat trees, and plenty of exciting toys to provide mental and physical stimulation. You could also consider making a catio so your cat can access the outside world in a safe and controlled way.

In multi-cat households, you’ll also want to keep your sexually active male away from any unspayed females inside your home. This is especially with male and female cats from the same litter. To them, a mate is a mate! But cats from the same family mating can cause a whole host of pregnancy complications and birth defects.

Also, many owners don’t realize that cats can get pregnant while nursing. So if you have a female cat that has just had a litter of kittens, don’t assume she is safe from round two! She will still need to be separated from your unneutered male cat while she is in heat.

Cats communicate a lot through their sense of smell. When female cats are in heat, their pheromones will indicate their fertility. This is why cats rub their faces on things more when in heat. A lot of feline pheromones are produced in the cheeks, and they’ll be transferred onto the other object. Upon smelling these pheromones, males will know there is a female in heat nearby.

Pheromone products can therefore be used to calm cats down. Injecting calming pheromones into their environment can help to relax active males and override the heat pheromones produced by females. You can get pheromone sprays, diffusers, and even pet collars.

In my experience, calming collars work for cats best of all. As the collar is around your cat’s neck, the calming pheromones follow them wherever they go. You also won’t have to keep reapplying the product as you would with a spray. Simply let the collar release all of the pheromones before replacing it with a fresh one.

One of the most problematic male cat in heat symptoms is spraying. Males scent-mark for two reasons. Firstly, it is to signal to female cats in heat that they are searching for a mate. And secondly, it is to signal to male cats that this is their territory. They are telling other males that they need to look elsewhere to find a partner, as this spot belongs to them.

Unfortunately, when a cat pees somewhere once they are likely to return to this spot again and again. Although we might think the smell has gone, cats have millions more scent receptors than people. Lingering odors will make your male think it is okay to pee here. In other words, improper cleaning can encourage them to mark their territory.

During feline mating season, you’ll want to clean your home as much as possible. Clean up any bathroom accidents immediately and with an enzymatic cleaner. Also, keep your cat’s litter tray spotless to help encourage its use. We all know cats hate dirty litter trays!

Does your cat respond well to catnip? If so, it might be worthwhile giving your male cat some of the stuff to calm them down. Most cats love catnip! Using it acts as a distraction from finding a mate. Even if only a temporary solution, this might just be the respite you need.

A great way to give you cat catnip is by using catnip-infused toys for them to play with. Alternatively, you can purchase catnip sprays to squirt on your cat’s bed and scratching post. These sprays are less intense, so for extreme behaviors, catnip toys might be a better option.

Catnip causes cats to act a little crazy initially. They might run around like mad, start rolling around the floor, or even start purring and drooling. This is a sign your cat is having a good time. However, this initial reaction will only last for about 10 minutes. After this initial reaction has subsided, cats will become much more lethargic and sleepy.

Remember though, catnip doesn’t elicit a response in all felines. Between 50% and 30% of all domestic cats lack the catnip gene. This means that the substance will have zero effect on your cat’s behavior and mood. If you have never given your kitty catnip before, try them with a little and see how they respond.

5. Play As a Distraction

Playing with your male cat can also distract them from searching for a mate. Choose your cat’s favorite toys and schedule more playtime than usual. This will help them forget about looking for a female in heat, besides keeping them physically fit and healthy.

You should also consider getting automatic cat toys if you spend long periods away from home. Male cats can get bored otherwise, and, with nothing else to do, searching for a female to mate with suddenly becomes their favorite pastime.

How to Stop a Male Cat From Mating?

Neutering is where your vet will surgically prevent your male cat from reproducing. In females, it is known as spaying, but in males, it is known as castration. The operation involves removing their testicles which produce the hormone testosterone. Without this hormone, cats will be infertile and thus not in heat. All of their frustrating heat symptoms will disappear!

There are also some other benefits of getting your male cat neutered:

Many owners are concerned about how neutering might impact their cats’ personalities. However, female cat behavior after spaying doesn’t really shift, and neither does the behavior of a male after castration. They’ll just become less insistent on searching for a mate, but their personalities will be just as lovable as before!

It is important to note that freshly neutered males can still impregnate females as it takes a little while for testosterone levels to drop and sperm to clean out the pipes. Just as you need to keep a cat confined after spay operations, you need to keep males confined as well. This will stop any unwanted pregnancies in this period and allow your male cat time to recover.

When do male cats go into heat? Well, this is a trick question really! As we have just learned, male cats are always in heat. Once they reach sexual maturity at around 6 months of age, they can impregnate a female at any given time.

With that being said, they tend to display more severe heat symptoms from February to October. That is because this is when females are in heat. The more active females there are nearby, the more agitated and insistent males become in finding one to mate with. This can cause unwanted behaviors such as spraying, meowing, and even running away from home!

It is important to try and calm a male cat in heat so these behaviors don’t get out of hand. Or, if you want to make sure cat mating is never successful, speak to your vet about getting your cat neutered.