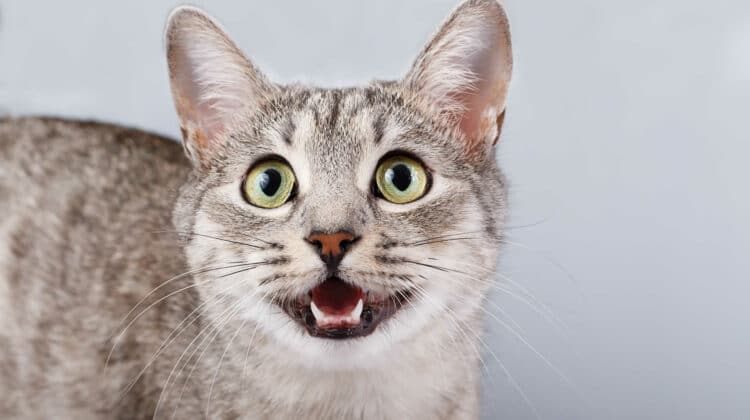 After thousands of years of living with us, our cats have learned that vocalizations are the best way to tell us something. Although meowing is the most common way cats “speak,” they also make various other noises, such as yowling or growling. But one of the strangest noises a cat can make is a chirp.

Chirping sounds remarkably like a bird and, in my opinion, is a very confusing noise to hear. In fact, my cat chirps so much that she hardly meows at all! So, this got me thinking: Why does my cat chirp instead of meow? What’s she trying to communicate? Is something wrong?

It turns out that nobody truly knows why cats chirp, but there are multiple theories that I think make sense. These are that your kitty wants you to follow them, is trying to say hello, wants your attention, or that its hunting instincts have kicked in.

In this article, I go over each of these theories so you can decide for yourself which ones you think hold up. I also cover whether a cat’s chirping is something you need to worry about. Hopefully, by the end of this article, you’ll have a better idea of what is going on inside your kitty’s head.

One of the many sounds that a cat can make is a chirp. Also known as a trill or chirrup, this is a very short, distinctive sound that is relatively high-pitched. Strangely enough, I think this trilling noise sounds like a bird’s warble. It’s almost as if they are trying to mimic the songbirds that so often become their prey!

The different sounds felines make can be sorted into three categories: meowing, murmuring, and aggressive. Chirping, alongside the more common sound of purring, is classed as a murmur, as the noise is typically made when your kitty’s mouth is mostly closed.

Why Does My Cat Trill Instead of Meow?

Although there has been tons of research into this very question, the simple answer is that we don’t know why our feline friends sometimes chirp instead of meow. Even with close observation, it can be tough to understand what a cat is trying to communicate when they talk to us.

That being said, there are some theories as to why cats make this trilling sound that I think hold up pretty well. I’ve gone into each of these guesses below so you can try to come to your own conclusion. Let’s get started!

It has been documented that when a female cat has kittens, she uses chirping sounds to get the kittens to follow her. If your kitty has recently given birth to a litter, this might provide a reason for her chirping. She’s just communicating to her young that she wants their attention.

However, your cat may also be trilling at you! Cats pick up this behavior from their mothers while they are young, so it makes sense that they would replicate the noise when they want you to follow them as well. Why not go over to your cat and see if she tries to take you somewhere? If so, you might have just found the answer you’re looking for!

2. They Are Saying Hello

Another option is that your cat uses its chirps and trills to say hello. This is most likely the case if your kitty only trills at you when you first come home or enter a room. If your feline does like to greet you, I suggest you return the favor. Cats like it when you talk to them and often find the sound of their owner’s voice comforting, so say “hello” back!

What is perhaps most interesting about a cat’s chirping sound is that cats also use it to greet one another. Meowing is typically only used to communicate with humans, so I find it fascinating that this is one of the few noises that felines use with each other and ourselves.

3. They Want Your Attention

Sometimes, your kitty may invade your personal space while chirping by rubbing against you or getting in your face. If this is the case, it’s probably your kitty’s way of trying to get your attention. When you have the time, I’d make use of this show of affection and give your cat some loving. After all, who doesn’t love a cuddle with their furry friend?

You’ll soon know if you read your feline’s trilling correctly by how they respond to your petting. Most cats purr when you pet them, but there are other signs of contentment. For example, my cat drools when I pet him. Just ensure you don’t overstimulate your feline by petting them for too long. My friend’s cat bites me when I pet her too much, and sometimes it really hurts!

4. Their Hunting Instincts Are Kicking In

The final theory I want to cover is that your cat chirps when its hunting instincts kick in. This usually happens when a cat is watching birds or insects, but they sometimes trill at their toys as well. If this is the reason, your feline will likely appear very focused on its potential prey at this time.

If your cat is making weird mouth movements while chirping, it may be that they’re chattering instead. This often follows a feline’s chirp when they are focused on their prey, but it sounds slightly more guttural than the squeaky trilling sound. They’re essentially getting super excited about the upcoming hunt and are preparing to pounce!

Should I Worry My Cat’s Meow Sounds Like a Chirp?

I’m sure you’ll be glad to hear that it is considered normal for cats to use chirping as a form of communication. It is a social sound, so if your cat chirps more than others, it might just mean that your kitty is a very social feline! You may also notice an increase in chirping if your female cat has just had a litter, as mother cats often trill to their kittens when they’re young.

Some people become worried when they hear their feline trill, as they think it may indicate that their kitty is ill. Although cats make weird noises when sick, this usually doesn’t include chirping. Other sounds, such as yowling or wheezing, are much more likely a sign of illness.

This being said, if a cat can’t meow and just squeaks (a very similar noise to a trill), it can indicate that your kitty is suffering from certain diseases, such as an upper respiratory infection and hyperthyroidism, or an injury to its vocal cords. This is also true if your cat’s meow is weak and raspy, so I recommend you speak to your vet if either of these is the case.

Cats can make so many weird and wonderful noises. While meowing and purring are their most common vocalizations, growling, yowling, hissing, and chirping are heard at one point or another. Many of these noises are self-explanatory, but chirping is one of those sounds that can be hard to understand. So, why does my cat chirp instead of meow?

Although the exact answer to this question isn’t currently known, some theories try to explain this behavior. These are that your cat wants you to follow them, they are trying to say hello, they want your attention, or the presence of prey has caused your feline’s hunting instincts to kick in.

Some people find it concerning when their cat chirps and does not meow. However, chirping is a normal form of communication in felines and is one of the few vocalizations they use with each other! Therefore, you could take their chirping as a compliment – your cat clearly sees you as an equal and a true part of the family!