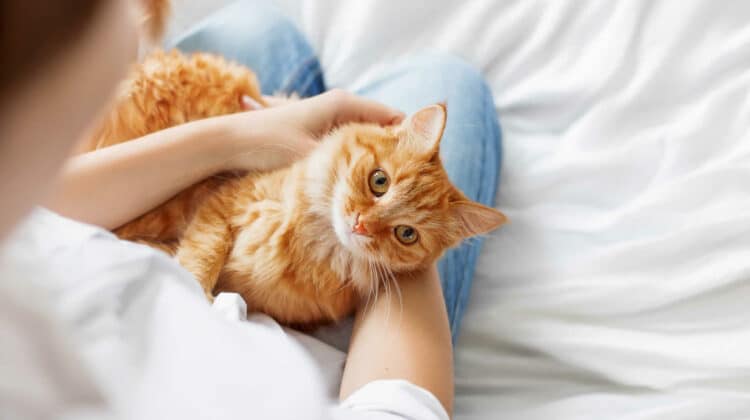 It turns out that although cats’ eyes work in much the same way as ours, they see us very differently from how we see one another. Cats have a more limited view of the world than us, as they struggle to see objects in the distance, see colors with lower saturation, and distinguish reds and pinks.

Research has also shown that cats find facial recognition difficult and typically see us as large, clumsy cats rather than humans! However, your furry friend can still identify you and your facial expressions with the help of other cues, such as the tone of your voice.

In this article, I go over these differences in detail. Read on, and you will learn about how cats see and what they see when they look at you so that you can understand your feline a little better.

How Do Cats See?

Although they look very different, cats’ eyes work much the same way as human eyes. Firstly, light enters the eye through the cornea and is refracted (bent) so that it passes through the pupil and lens before hitting the retina. The retina is a layer of tissue at the back of the eye that contains sensory cells called photoreceptors.

These photoreceptors can be split into two groups, known as rods and cones:

When light hits the retina, these sensory cells respond by converting the light into electrical impulses, which send a message to the brain via the optic nerve. This message is what paints the picture of what your cat sees.

Because cats are typically nocturnal creatures, they also have a layer of cells behind the retina called the tapetum lucidum (shining layer). These cells act like a mirror and allow light to bounce back onto the retina, improving night vision. This causes a cat’s eyes to glow at night when the light hits them.

What Do Cats See When They Look at Humans?

This means that cats see us very differently from how we see one another. Read on to find out just what these differences are!

Can Cats See Us in Color?

Many people assume that cats view the world in shades of gray rather than color. Although cats can’t see color in as high saturation as we can, they do experience color! However, cats have a much lower concentration of cone receptors than we do, meaning they can’t see colors as richly as us.

On top of this, cats have very few cones that respond to red light. This results in a view of the world that is similar to that of someone who is color blind: shades of blue and green can be seen easily, but shades of pink, red, and purple are often confused for different colors. So, if you have red hair, your kitty’s unlikely to view it that way! But if you have green eyes, your cat can see them clearly.

Although this seems like a dull view of the world, some new research suggests cats can see some ultraviolet colors that humans can only see when under a black light. They won’t see these ultraviolet colors when looking at us, as we don’t emit these UV wavelengths.

Still, many things in our environment have ultraviolet colorings, including some flowers and birds. Therefore, it may be that your feline’s view of the world is more amazing than you can imagine!

Can Cats See Us from Far Away?

As well as having a more muted view of the world, cats also appear to have a more limited view. As humans, we can focus on objects that are a long distance away from us: we have muscles in our eyes that change the shape of the lens, thereby altering the angle at which light enters the eye.

Unfortunately, felines don’t have these muscles in their eyes, meaning they are nearsighted. The furthest distance a cat can clearly see is up to 20 inches away. So, if you’re standing quite far away from your kitty, you’re more likely to look like a big blurry blob than a person.

This may seem like a hindrance, but a feline’s close-up vision is much more important than their long-distance sight as it is better suited for hunting and capturing prey. In the wild, the ability to hunt mice and birds and spot other predators effectively could be the difference between life and death.

Our furry friends’ hunting instincts are so ingrained that they may still show predatory behaviors around the house. For example, my cat nibbles my fingers when we’re playing, and in some cases, my cat suddenly attacks me because he has been stalking me like prey! Your cat doesn’t see you as prey, though – she knows you’re you; she’s just having fun!

Can Cats Tell the Difference Between Humans?

Studies show that, when faced with images of a familiar and unfamiliar human, cats only recognize the familiar person about 50% of the time. This was a tiny percentage compared to identifying familiar cats or locations. However, the fact that a feline can recognize other familiar things suggests they are good at visual recognition – just not with our faces!

The good news is that cats do remember their owners; our feline friends just use their other senses to identify us instead of facial recognition. For example, felines are fantastic at recognizing the sound of our voices, so cats like it when you talk to them.

A cat’s sense of smell is also very powerful and is often used to identify people. This is why my cat lays on my clothes all the time; she recognizes my scent. Also, some felines mark you as a family member by leaving their scent on you. My cat licks me, but other cats may rub their teeth on you to the same effect.

Our feline friends find it tough to recognize our faces and cannot read our facial expressions. However, that doesn’t mean they can’t read our emotions. Your cat probably can’t do this through vision alone, but it can pick up on your feelings with the help of other cues. For example, your kitty may listen to the tone of your voice and look at your face.

Studies have also shown that felines not only perceive human emotions but that they respond to them as well! For example, cats do have a sense of humor, and even though they can’t laugh, they may respond to your smiles and laughter in their own way, such as purring or slow blinking.

The fact that cats can understand and respond to our emotions allows them to form close attachments. Many cats become distressed and less adventurous when their owners leave but show evident enthusiasm when they return, demonstrating the close bond that has formed.

This affection may also display itself through clinginess. For example, my cat wants me to watch her eat when I’ve been gone for a while. However, this can be a sign of anxiety, so perhaps be on the lookout for other traumatized cat symptoms if this becomes a habit.

Do Cats See Us As Another Species?

To us, the differences in how humans and cats look are so noticeable that it’s easy to see that we’re separate species. Although you’d think the lack of fur and tail would be a dead giveaway, it turns out that feline’s actually don’t make this distinction. Instead, they see us as huge, clumsy cats!

When you look at how cats interact with each other, it is clear that they use similar forms of communication with us. For example, your feline may rub against you and lift its tail while greeting you. The exception to this is meowing. Cats typically don’t meow at one another, so this form of communication is solely for our benefit.

There is also evidence that cats see us as a part of their family. In some instances, your kitty may treat you how they would treat their mother. For example, my cat makes biscuits on me, just like a kitten asking its mom for milk. On the other hand, your furry friend may also treat you like a kitten! This is more likely the case if your cat is so affectionate and often tries to groom you.

So, what do cats see when they look at humans? A cat’s eyes work in much the same way that ours do, but some key differences considerably change how their vision works.

While felines have fantastic vision in low light conditions, they see colors with a much lower saturation than we do, find it hard to differentiate reds and pinks, and struggle with nearsightedness. Cats also fail to see us as another species and find facial recognition difficult. Still, with the help of other cues, they can tell the difference between humans and recognize our emotions.

This means that although cats may not see us exactly how we see them, this in no way stops your kitty from forming a lasting bond with you. To them, you’re a big, clumsy cat instead of a human being. As long as my kitty loves me, I think I can deal with that! After all, who doesn’t want to be a little more cat?