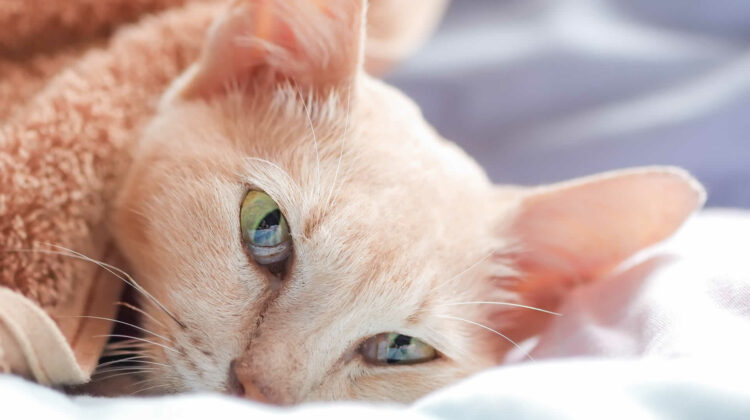 We are used to cats making a range of different noises. When being petted, we’ll hear them purr. When after our attention, we’ll hear them meow. And when they’re angry and aggressive they’ll growl and hiss. These are all normal noises for cats and give us some insight into how they’re feeling.

When we hear a cat making weird noises different from those above, it’s often very concerning for owners. Why are they making these strange sounds? Do cats make weird noises when they’re sick? Of course, this all depends on the noise in question, but odd noises can indeed be a sign of sickness.

Five strange sounds, in particular, indicate something may not be right: wheezing, stridor, stertor, gurgling, and crackling. Additionally, sick cats tend to be more vocal and meow much more frequently to their owners, known as yowling. Any behavior changes can indicate a problem though, and a sudden decrease in vocalization can be just as concerning.

In this article, I look more into why your cat is making weird noises when they’re sick and the other symptoms of illness. The quicker you can pick up that your little furball isn’t feeling 100%, the sooner you can get them the help they need.

What Weird Noises Do Cats Make When Sick?

There are some noises we can expect to hear from a sick cat. For example, a feline that is coughing or sneezing likely has some form of upper respiratory infection. However, some noises are so strange and unexpected they can be super confusing to owners.

It’s a good idea to know what strange sounds indicate illness and why cats make these weird noises when sick. Cats are masters at hiding pain, and so these noises may be the first indication you have that something is seriously wrong. Be sure to learn the meaning of these sounds so, if needed, you can get the cat to the veterinarian as soon as possible.

One of the strange noises you might hear your cat make is a wheeze. This sounds like a high-pitched whistling noise that occurs each time your cat exhales. It is caused by a restriction of the lower airways and the weird noise we hear is the sound of air trapped inside the lungs.

Primarily, wheezing is caused by asthma. Most veterinarians agree asthma is triggered by allergens in the air, such as pollen, dust mites, or tobacco smoke which cause inflammation of the airways. Whether these substances will affect your cat simply depends on their bodies and how sensitive their airways are. Moreover, stress and asthma are closely linked, with stressed-out felines exhibiting more severe symptoms.

If you hear your cat wheezing, you must take them to the vet. This is especially true if your cat sounds congested when breathing or if the wheezing continues for a long period. Where the wheezing is severe it may be an emergency, whereas milder symptoms can usually wait for a scheduled checkup.

When at your appointment, your vet will be able to confirm whether or not your cat has asthma and is susceptible to asthma attacks. Unfortunately, the disease has no cure, and rather the symptoms are treated with corticosteroids and bronchodilators. These help to reduce airway inflammation when exposed to specific allergens to improve breathing.

Asthma is often progressive and your cat may still suffer from asthma attacks, even with medication. Therefore, you still need to listen for episodes of wheezing in cats with asthma. These can range from mild to severe, but some cats will need urgent medical attention to help them breathe.

With that being said, asthma isn’t all bad and is not something to stress over. By following the treatment prescribed by your veterinarian and regularly checking their respiratory rate most asthmatic cats can live happy and fulfilling lives.

Stridor is another weird sound cats and kittens make when sick. It is characterized as a high-pitched vibrating sound caused by a narrowing of your cat’s upper airways. The sound is often confused with wheezing as the two sound very similar. However, wheezing only happens on the inhale while stridor can happen on the inhale and exhale.

The cause of these two similar yet equally strange sounds also differs. Whereas asthma is caused by inflammation of the lower airways, stridor is linked with the upper airways. If your cat or kitten is making this weird sound, it usually signifies an obstruction in the airways in or just below the voice box. Examples of such obstructions that can cause stridor include:

Again, if you hear your cat making weird noises that sound like stridor, you need to call your veterinarian. They will be able to examine your cat and find a reason for their loud and high-pitched breathing.

Based on their findings, they’ll be able to recommend the best course of action. This will usually either be removing the blockage from the airways physically or via surgery or prescribing treatment to fight a parasitic infection. Once your cat is better and the obstruction has been removed, you won’t hear your cat making weird noises anymore.

Stertor is another noise caused by an obstruction in a cat’s upper airways. The weird sound is characterized by a low-pitched rumble that sounds like a snore, occurring on either the inhalation, exhalation or both. As such, it is distinguished from stridor not from when it occurs in the respiratory cycle but rather the pitch of the noise.

Cats with flat faces (Brachycephalic breeds) such as Persians commonly suffer from stertor due to their altered anatomy; although their noses are shortened, their soft tissue structures are not. This often leads to flat-faced cats having an elongated soft palette, pinched nostrils, or everted laryngeal saccules which obstruct the upper airways.

However, non-brachycephalic breeds can also suffer from stertor due to certain respiratory conditions. Examples include:

Alongside your cat making this weird noise, you’ll likely notice other symptoms of congestion. This includes nasal discharge and frequent sneezing. Is your cat breathing heavily while resting? This could be another sign that your cat is struggling to breathe and needs medical attention. Book an appointment with your vet for diagnosis who will provide treatment based on the cause.

You may also hear your cat making weird gurgling noises from their stomach. This is the sound of gases moving along your cat’s digestive tract and is nothing to worry about. Cats that eat quickly will naturally inhale more air as they eat, leading to tummy rumbles. Moreover, gases are produced through digestion which may also make an audible gurgling sound.

However, if your cat is making weird gurgling noises from its throat, this is usually a sign they are sick. Typically, it indicates that they are suffering from either tracheal collapse, laryngitis, or pharyngitis:

Therefore, if you hear gurgling from your cat’s throat, especially if accompanied by heavy breathing and congestion, speak to your vet. However, where the gurgling occurs right after eating or clearly from their stomach, sit back and relax – this type of sound is nothing to worry about.

Crackling is another sound you may hear your cat making when sick. This is also to do with your cat’s respiratory system, and these short popping noises usually indicate that there is fluid in the lungs. The cracking sound is often very quiet and may only be picked up by vets. However, listen closely and you may also notice this weird noise coming from their chest.

Medically, this accumulation of fluid is known as either pulmonary edema or pleural effusion, depending on the location of the fluid accumulation. It can be caused by several conditions, including congestive heart failure or infectious disease. No matter what the cause, it prevents the lungs from expanding as usual, starving their bodies of oxygen. As such, it is considered a medical emergency.

Thankfully, there are other signs aside from cracking that indicate fluid accumulation. For example, you can pay attention to cat sleeping positions when sick. When there is fluid on the lungs or your cat is struggling to breathe, they will often lie stretched out on their side as to not compress their airways.

Other symptoms of fluid buildup on the lungs include:

See any of these symptoms present at once and take your cat to the vet immediately. Your cat needs to be stabilized and will need its breathing facilitated through oxygen therapy. The vet will then remove the fluid and work towards treating the underlying condition.

Yowling is similar to meowing but more drawn out and melodic. If you hear your cat or kitten making weird noises like this, it’s another indication they feel sick. However, unlike the other strange noises on this list which are caused by the sound of air traveling through constricted or damaged airways, yowling is a purposeful vocalization that cats make when in pain.

The cause of pain in a yowling cat could be indicative of many conditions. Therefore, to determine what is wrong with your kitty you need to look out for other symptoms of illness. Some examples and symptoms include:

If you think your cat is yowling because of a medical condition then take them to see the vet. However, yowling is a normal noise for cats to make in some instances, including when females are in heat or they feel their territory has been infringed upon. Therefore, if your cat seems to be yowling for no reason, it could be that they’re fine other than feeling a little anxious.

So, do cats make weird noises when sick? Yes, they do! There is a whole host of peculiar sounds you might hear from your cat, including wheezing, stridor, stertor, gurgling, and crackling. These are all indicative of some type of respiratory issue and you need to get advice from a vet.

Another more generalized noise a sick cat makes is yowling. Cats purposefully yowl when in pain or have an underlying medical condition, such as arthritis, dental diseases, hyperthyroidism, and stomach issues. Watch out for other symptoms in combination with this strange noise and if in doubt visit your vet – your kitty is likely trying to tell you they’re not feeling great and want a little extra care!