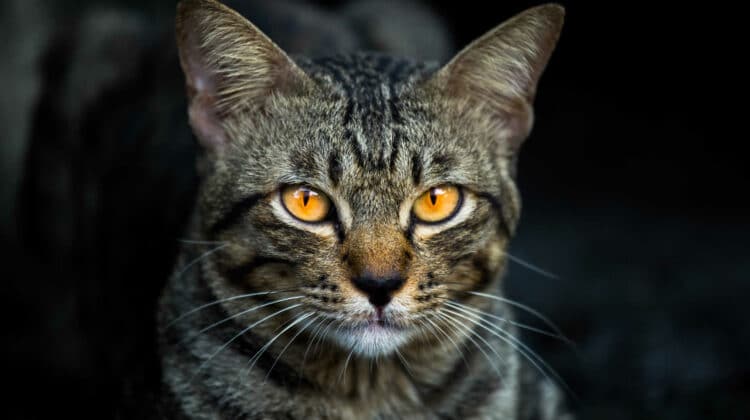 When a cat is breathing healthily, it should be quiet and done with ease. Any breathing that is louder, faster, or with difficulty can be a sign of many medical conditions. Therefore, if my cat sounds congested when breathing, I immediately panic.

As a cat owner, I’m sure you’ve all felt the same at some point. When your cat sounds congested, it is difficult not to be alarmed. It’s also vital you know the reasons for a cat breathing loudly and other symptoms to watch for so you can help them get the treatment they need.

In this article, I will run through all the reasons why a cat sounds congested when breathing and the different types of noisy breathing you may hear. I’ll also give you advice on what to do to help so your furry friend can breathe easily again!

What is Noisy Breathing?

Noisy breathing is exactly as it sounds. Rather than quiet breaths, your cat will make an audible noise with each inhalation and/or exhalation. There are two different types of loud breathing you might hear, which are categorized based on whether they occur on the breath in or out. They can be described as follows:

In both cases, the air your cat is breathing is struggling to move through the airways. The obstructions and narrowing of the throat, nasal passages, larynx, or windpipe mean the air faces resistance. This can cause it to make a loud noise and means your cat sounds congested.

Why Does My Cat Sound Congested When Breathing?

Now we know what noisy breathing is, we can look more closely at what can cause these airway obstructions. As you will see, many medical conditions are linked with congested breathing. Read through each and look at the other symptoms for a better idea of what is wrong with your cat.

One reason why your cat sounds congested when breathing is due to a foreign body obstructing its airways. Cats are curious creatures and love exploring the world around them. However, if they can sometimes end up inhaling foreign material which can get lodged in their trachea.

This object obstructs the airways and can cause noisy breathing as the air blows past the foreign body. It will also cause breathing difficulties in cats, such as your cat breathing heavily while resting or having an irregular breathing pattern. Foreign bodies can also be the reason your cat sounds congested when purring.

The foreign body will need to be removed by a vet so your cat’s labored breathing returns to normal. Get your cat to see a medical professional as soon as possible so they aren’t suffering any longer than they need to be.

If your cat is wheezing when breathing loudly, there is a high chance they are asthmatic. Cats suffering from asthma show several other clinical signs as well, including rapid breathing, coughing or hacking, and a general difficulty when breathing.

Asthma is caused by a narrowing of the airways due to an inflammatory response. This causes them to narrow, making breathing noisy and difficult. As such, cats can breathe through their mouth if they have asthma in an attempt to get more air into the lungs.

According to most veterinarians, irritants in the air cause asthma or are at least responsible for triggering asthma attacks. A range of different things can act as irritants, including pollen, dust mites, tobacco smoke, artificial fragrances, and even cats themselves! Therefore, one way to help your cat is by trying to reduce the number of allergens in your home.

Below are some ideas that may help cats with asthma:

Additionally, you should take your cat to the vet. They will be able to prescribe a medication called corticosteroids which reduce inflammation of the airways. They may be given in combination bronchodilators that can help dilate the airways and make breathing even easier.

Congestion and congested breathing are some of the signs of upper respiratory infections (URIs) in cats. These types of infections are extremely common and are comparable to the human cold. Caused by a range of viruses and bacteria, they infect the nose, throat, and sinuses.

If your cat is suffering from a URI, the body will respond by initiating an immune response. This causes the upper airways to become inflamed and an over-production of mucus which further obstructs the passages. Together, this causes your cat to sound congested when breathing.

Some of the common symptoms aside from cats breathing loud are as follows:

Additionally, cats purr when they sleep as a sign of contentment or when dreaming. This is normal and nothing to worry about. However, if this purring sound starts to become more like snoring, it is another sign they could be congested and feeling a little under the weather.

Again, the best call of action is to visit your veterinarian. They’ll be able to prescribe treatment to fight the infection and your kitty will be feeling as right as rain in no time.

When breathing, most cats won’t make an audible noise unless something is wrong. However, flat-faced cat breeds are typically more noisy breathers due to physical abnormalities in the airways. Together, these abnormalities are known as brachycephalic obstructive airway syndrome (BOAS).

There are several different abnormalities common in brachycephalic breeds such as Persians, Exotic Shorthairs, and Himalayans. These conditions include:

If a cat suffers from BOAS, it could suffer from one or more of the above examples. In each case, the airways are obstructed either by excess tissue or a reduced diameter, causing airway resistance. This means your cat will sound congested and breathe loudly. Cats with BOAS will also commonly exhibit open-mouth breathing.

If your flat-faced cat is struggling to breathe, visit the vet so they can perform an examination. If BOAS is given as the diagnosis, your veterinarian may prescribe medication or suggest surgery to correct the physical abnormality.

Sometimes, a buildup of fluid in or around the lungs can cause cats to sound congested when breathing. When the fluid accumulates inside the alveoli of the lungs, this is known as pulmonary edema, whereas fluid collection in the sac surrounding the lungs is termed as a pleural effusion.

In either case, the fluid prevents a cat’s lungs from expanding as they should. This makes it difficult for cats not only to breathe but also for their bodies to get enough oxygen. As such, when breathing is affected by an accumulation of fluid in the lungs, it is known as a medical emergency.

There are several symptoms of fluid accumulation in the lungs that you can watch out for, including:

If you notice any of these symptoms in combination, get to the vet as soon as possible. They will be able to help stabilize your cat and facilitate their breathing through oxygen therapy. The vet will then work to remove the fluid from the lungs so breathing can return to normal.

Pulmonary edema and pleural effusion can be caused by a whole host of serious underlying medical conditions, including viral infections, congestive heart failure, some cancers, and pneumonia. Therefore, once your cat is stabilized and breathing normally, a diagnosis of the cause and appropriate treatment will be administered.

Chronic obstructive pulmonary disease (COPD) is a progressive lung disease that ranges from mild to severe. However, all stages have one thing in common: they restrict airflow in and out of the lungs can make your cat sound congested when breathing.

There is no known cause for COPD in cats, but long-term exposure to irritants is thought to be closely related to the condition. These irritants are the same as what vets think trigger asthma, including allergens, tobacco smoke, and other airborne pollutants. Additionally, the disease is more common in older cats than younger ones.

As COPD is progressive, your cat needs to receive treatment sooner rather than later. Therefore, watch out for signs of congestion, breathlessness, and frequent respiratory infections – three of the most common signs of the disease. If you spot them, book a veterinary appointment right away.

Although a less likely explanation, hyperthyroidism could be the reason why your cat is breathing loudly through its nose. However, more common symptoms of this condition include:

Cats with this condition produce an excess of thyroid hormone from the thyroid glands located at the base of the neck. This hormone plays a key role in metabolism, hence why cats seem to eat more yet lose weight and appear more active than usual.

As the thyroid glands release more thyroid hormones, they start to become enlarged. Due to their position in the neck, this can cause them to obstruct the airways, resulting in difficult and noisy breathing. However, this symptom is entirely dependent on how enlarged the glands become.

As with all conditions on this list, you will need to book an appointment with the vet. They may suggest one of three treatment options: (1) anti-thyroid medication, (2) surgery to remove the thyroid gland, or (3) radioactive iodine treatment.

Tumors can develop anywhere on a cat’s body, including within the airways. When this occurs and as the tumors grow, it can cause airway obstruction and congested breathing. Examples include tumors in the windpipe, lungs, voice box, sinuses, or at the back of the throat.

In all cases, tumors in the airways are extremely rare in cats. The symptoms will vary depending precisely where in the airways the tumor is growing, for example:

In the majority of cases, tumors found in the airways will not be cancerous, so try not to worry. However, they still need to be removed before they get too large and severely impact your cat’s life. If the vet discovers the tumors are cancerous, your cat will need to undergo cancer treatment. This could include surgical removal of the tissue and chemotherapy.

What To Do When My Cat Sounds Congested When Breathing?

As you can see, when a cat sounds congested when breathing they usually aren’t well in some shape or form. This could be as simple as having a foreign body stuck in their trachea. However, a cat breathing loudly is linked to several more severe conditions, including cancers, COPD, and fluid buildup in the lungs.

As such, the first thing I do if my cat sounds congested when breathing is book an appointment with my veterinarian. Once at the vet, they will perform a physical examination and may conduct other tests – such as blood and urine tests or x-rays – to help diagnose the cause of their noisy breathing.

Based on their results, they will diagnose the cause and discuss treatment options. Commonly, this consists of medication, surgery, or a combination of the two. Once back home, you will need to follow the treatment prescribed to help your cat recover from its illness. Where your cat has had surgery to remove the obstruction, you will need to provide care at home until your cat has recovered.

Moreover, you can help to prevent congested breathing in the future by:

When a cat sounds congested and is breathing loudly, it’s time to take a trip to the vet. There is a huge range of different medical conditions that can cause a cat to sound congested when breathing. The most likely options are all listed above, but this list isn’t exhaustive.

Breathing is essential for your cat’s survival and brings their bodies the oxygen it needs to function. Therefore, any breathing abnormalities such as this should be taken seriously. Follow the treatment recommended and follow my tips for prevention and your cat’s breathing should quieten down in no time at all.