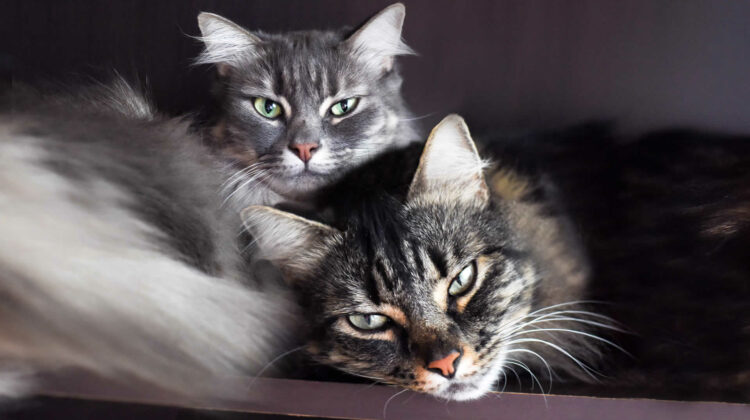 Usually, mating just one time has a very high chance of conception. So, if you think your cat could be pregnant, you may well be right! Perhaps you caught her mating in the garden? Or maybe her behavior is just a little weird?

Here I share how you can tell if cat mating was successful and if you have a litter of kittens on the way. There are both physical and behavioral symptoms you can look out for. Most of these occur due to hormonal changes in your cat’s body.

If you spot any of these signs, take your cat to the vet for an official diagnosis. And get prepared – very soon you’ll have a litter of kittens on your hands! If this is an unplanned pregnancy, you might also want to consider getting your cat spayed in the future.

Before I discuss how to tell if cat mating was successful, it’s important to understand the mating process in a little more detail. For a female cat to fall pregnant, she has to be in heat at the time of mating. A female cat will usually last for around a week, and you’ll be able to tell from her strange behaviors, such as:

When a female cat does mate in heat, there is a pretty high chance she will fall pregnant. This is because, unlike human reproduction, mating triggers ovulation in female cats. Therefore, an egg is always released and present at the same time a male cat’s semen enters the body. These can easily fuse to form new life.

This ovulation during mating is all thanks to male cats having a barbed penis. When first penetrating the female, the spikes lie flat and don’t hurt the queen. But as the male withdraws his penis, the spikes scratch the female. This often causes her to scream in pain. It is the action of penis withdrawal that also stimulates ovulation.

Age is also not a limitation when it comes to cats mating. Cats can get pregnant from as early as the age of 4 months old! Many owners don’t realize pregnancy is even possible this young. Can cats get pregnant while nursing? They sure can! As I said, a female cat in heat can fall pregnant very easily.

If you are a breeder looking to breed your cats then this is great news. It shouldn’t take too much hard work to get your cat pregnant. However, if you’re not wanting a litter of kittens, get your female spayed before it is too late. Cats in heat are very persistent at finding a mate and won’t give up the search until they do!

When two cats mate, pregnancy is extremely likely. However, just because your female cat has mated, it does not necessarily mean it was successful. Your cat might not fall pregnant despite participating in sexual intercourse. Therefore, it is good to look out for indicators of mating success.

I have gone through 10 common pregnancy symptoms below. If you see any of these signs after mating, you’ll likely have a litter of kittens on the way soon.

Unspayed female cats will go into heat every 10 days to 3 weeks if the mating was unsuccessful. Therefore, the earliest indication of successful mating is the end of your cat’s heat cycle. Heat is very easy to notice in cats as their behavior changes drastically. Some of the notable signs of heat include:

If none of the above symptoms present themselves within 3 weeks of mating, your cat is probably pregnant. As they have conceived, the hormones in their bodies stop the cat from re-entering heat. They’re already pregnant, so they don’t need to search for another male.

Increased affection is a sign of heat, but it can also be an indication that mating was successful. This is again down to the hormonal changes happening in response to the pregnancy. Their motherly instincts are kicking and they want to love everything and everyone – including you!

There is also a possibility that cats will become more affectionate if mating is successful as they want you to look after them. As their owner, they know they can trust you. And as you do such a great job at looking after them, they want you to help look after their unborn kittens as well. By sticking by your side, your cat is using you as another layer of protection.

If your cat is pregnant, its appetite is going to increase. They’re not eating for themselves anymore – they’re eating for them and all the kittens growing in their belly! They need to eat more so that their offspring have the nutrients they need to grow. Plus, they need the right nutrients as well so they can stay strong throughout the pregnancy.

Shortly after mating, your cat’s appetite will only increase slightly. If your cat already has a large appetite, this sign of successful mating might not be that obvious. However, the later you get into the pregnancy, the more food your cat will need. By the end, anywhere from a 50% to a 100% increase in food is expected.

Hand in hand with increase appetite is weight gain. As your cat is eating more food, she will naturally put on more weight. Moreover, pregnant cats are generally less active. This means the food and the calories they are eating isn’t getting burned off at the same rate.

On top of this, your cat is growing new life inside of her. And these kittens will all weigh something, adding yet more weight to your cat. The amount of weight your cat gains will gradually increase throughout the pregnancy. It also varies hugely depending on the number of kittens in the litter. As a general rule, weight gain of 2lbs to 5lbs is standard.

As such, weight gain can be another sign of successful mating. However, this is more noticeable later down the line. If you’re looking for an immediate sign that mating is a success, other signs on this list are much easier to pick up early.

Nesting behavior is another sign that your cat is pregnant and mating was successful. However, this too is reserved for later on in the pregnancy. It refers to the act of your cat finding somewhere safe for her to give birth. You usually start to notice nesting behavior within the final few days.

In the wild, female cats would find somewhere hidden and dark to protect their newborn kittens from predators. Although no predators are lurking in your home, this instinctive behavior persists. Some of the places your cat might choose as a nesting spot include in a cupboard or under your couch.

If you know your cat is pregnant, it is a good idea to set up a nesting spot for them to use. You can purchase nesting boxes from pet stores – be sure to choose one big enough for the number of kittens in the litter. Put it in a quiet area of your home with low footfall. Line it with a heated pad covered with blankets and towels as well so it’s nice and cozy.

It is important to note that vomiting is also a symptom of many feline illnesses. Everything from eating a toxic substance to diabetes and hyperthyroidism can cause vomiting in pets. As such, you shouldn’t assume your cat is pregnant based on morning sickness alone. If your cat is vomiting frequently, take them to the vet to rule out any underlying medical conditions.

Another early sign of successful mating is enlarged pink nipples. You can notice changes in your cat’s nipples as soon as 2 weeks after mating. This is because your cat is getting ready to make milk to feed her new babies. As the milk gland starts to produce milk, the nipples become enlarged. They become pinker as blood rushes to the area to help with lactation.

This symptom is so common and noticeable that it even has a nickname of its own: pinking”. And we aren’t talking a little pink. Cats that have successfully mated will have bright lipstick-pink nipples poking through their fur. If you have a long-haired breed, be sure to take a look and see if you notice any difference.

Your cat’s nipples are not the only thing that will enlarge. Throughout pregnancy, your cat’s abdomen will of course grow bigger. As her litter of kittens grows inside her, she needs more space to house them. Her womb expands to give them space, making the classic “baby bump”. The more kittens she is carrying, the bigger the abdomen will become.

If your cat is overweight or obese, its enlarged abdomen might not be as obvious. However, you will be able to see a notable swelling in all cats of a healthy weight. After 20 days of pregnancy, you will even be able to feel some of the kittens in her stomach! Be gentle if you do have a feel. The last thing you want to do is hurt your cat or the unborn kittens.

Female cat behavior after mating changes. In particular, you will notice a change in habits. Pregnant cats will usually sleep more than usual. As they are growing life inside them, they are reserving as much of their energy as possible for this growth. They’ll spend less time running around and more time relaxing and resting.

Moreover, mood swings are also common in pregnant cats. Your kitty might go from being highly affectionate to being withdrawn. This is nothing to worry about – it is just an effect of the hormonal changes happening inside your feline. In fact, any behavioral changes at all after mating is a tell-tale sign it was successful.

If you want to know with certainty that mating was successful, speak to your vet. They’ll conduct an ultrasound scan to give you an official diagnosis. Ultrasounds are only available 16 days after mating occurred. They’ll also be able to tell you other information at the scan, such as how many kittens you can expect in the litter.

Even if you are pretty certain your cat is pregnant without an official diagnosis, you should still get one. The scans can highlight any problems with the pregnancy. Plus, your vet is the best person to go to for advice on giving your new kittens the best start in life.

Tips on Caring for a Pregnant Cat

Think your cat could be pregnant? If so, you’ll need to ensure you care properly for your pregnant cat. They don’t require any super special care. Caring for them is pretty much the same as caring for any normal adult feline. Still, here are some tips that can help ensure the mother stays healthy and strong throughout the pregnancy:

If you have an unspayed female cat, you must know how to tell if cat mating was successful. Otherwise, you might end up with a surprise litter of kittens of your hands! Thankfully, there are many changes to female cat behavior after mating, along with physical symptoms of pregnancy.

You can use all the symptoms on this list to figure out if your cat is pregnant. Always get an official diagnosis from a vet as well. And if you don’t want your cat falling pregnant again, seriously consider getting them spayed. On the other hand, breeders will be happy to notice some of these symptoms. Either way, these signs are sure to help you figure out what’s going on.