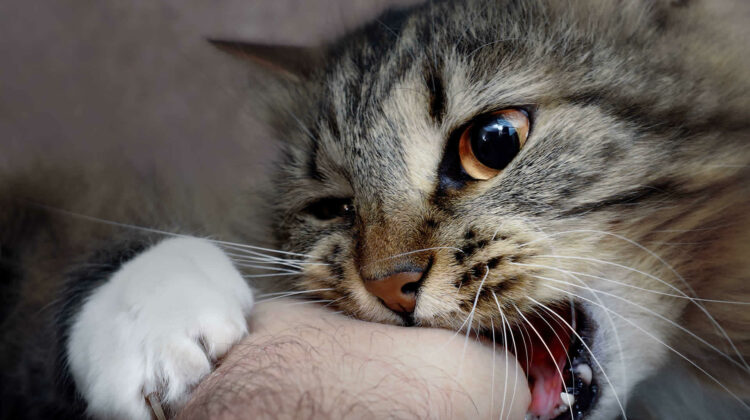 Aggression is a common behavior problem with cats, both in the wild and domestic felines. This aggression can be directed towards other animals or their owners. With their sharp teeth and pointed claws, an angry and aggressive cat can be terrifying and can cause some real damage.

Whereas some cats suddenly attack their owners for obvious reasons – such as a big event has just happened that’s caused them to feel extreme stress – unprovoked aggression in cats is also common. In either situation, there’s no doubt one question on your mind: How can I stop my cat from biting and attacking me?

Thankfully, with time and patience, you can correct behavioral issues such as aggression. One of my cats is a rescue cat that used to bite and scratch me frequently. But now, she’s super friendly! If you want to find out how I changed this behavior then keep reading. In this article, I share how I stop my cat from biting and attacking me and how you can do the same.

Why Do Cats Suddenly Attack Their Owners?

Before we look at how to stop a cat from biting and attacking you, we need to understand what causes cats to suddenly attack their owners. By finding the root of the issue, it makes the methods used to stop the behavior much easier to understand.

Generally, when my cat attacks me violently, it’s due to one of the following reasons:

How Do I Stop My Cat From Attacking Me?

Now we understand more why cats might bite and attack us when unprovoked, we can begin looking at how to stop it. Here are six ideas that should help diminish that bad and formidable behavior.

1. Take Your Cat to the Vet

You should gain the advice of a professional vet if your cat acts aggressively when unprovoked. As aggression in cats can be liked to several medical conditions, your vet needs to perform a routine check-up to see if there is an underlying cause. Some of the illnesses that can cause aggression in cats include:

If your vet diagnoses your cat with a medical illness, treating the underlying condition should stop the unprovoked aggression in cats. As soon as your cat is happy and healthy again, it will stop biting and attacking you.

2. Schedule Play Session with Your Cat

One of the common causes of unprovoked aggression in cats is misdirected play. My cat viciously attacked me when she was younger, but it was clear she was just hyperactive and trying to have fun. Therefore, scheduling daily play sessions with your cat can help reduce their aggressive outbursts.

As a general rule, you should spend at least 15 minutes per day playing together. Kittens that are full of energy may need a little more, whereas older cats will need less. If you want advice on how much playtime you should engage in each day, speak to your vet. They’ll be able to advise you based on their age and health.

For the highest chance of success, you want to make each daily play session as entertaining as possible. To do this, try and purchase several different types of cat toys as these will teach your cat different skills. For example, a feather wand is great for your cat to stalk and chase, whereas a stuffed toy is better for wrestling and sinking those sharp claws into.

Moreover, you can use playtime as a way to teach your cat which items are toys and which items are not. When playing together, avoid wriggling your fingers in a teasing way as this will only teach your cat that you are a toy after all. Instead, stick with the designated cat toys, and if they attempt to bite or attack your hand redirect them to a toy.

3. Provide Other Sources of Stimulation

Playing with your cat offers a great source of entertainment. However, your cat also needs other sources of stimulation to keep her happy. And a happy cat is not an aggressive cat! Some examples of things you can purchase or use to make your home more appealing to cats include:

As well as your home environment being fun, it also needs to feel safe. Fear and defensiveness is one of the main reasons cats bite and attack their owners. Luckily, there are a few easy things you can do to create a calming and stress-free environment for your kitty, including:

In addition to creating a relaxing atmosphere, you should watch out for signs of stress in cats. Typically, stressed cats are more withdrawn than usual, groom themselves excessively, and often eat and drink less. Moreover, cats bite their nails when feeling anxious and may stop using their litter tray or practicing other learned behaviors.

Noticing the signs of stress can help you to pinpoint the cause. Where possible, removing the stressor is a great idea and will help your cat to relax. You’ll also know to avoid this stressor or stressful activity in the future, helping to reduce aggressive outbursts.

5. Learn the Warning Signs of Aggression

Often a cat won’t maliciously attempt to hurt their owner by biting and scratching. It is usually a case of the person unknowingly approaching their cat when they are feeling aggressive towards something else or for an entirely unrelated reason.

Therefore, simply avoiding your kitty when she is in a bad mood can dramatically reduce the amount of unprovoked aggression in cats. The trouble lies in communication – cats cannot speak English or any other human language for that matter. So, to know what our cats are thinking and feeling, we need to learn a new language entirely: cat body language.

When I use the term “body language”, I am referring to your cat’s body posture, facial expressions, and actions. By paying attention to their body language, we can learn the warning signs of aggression. These signs vary depending on whether your cat is acting offensively or defensively.

An offensive cat will try to make itself look as large and intimidating as possible and so its coat will puff up to give the illusion of size. It will also stand in an upright posture, potentially arching its back upwards. Its pupils will be dilated and its eyes fixed on the target with its head lowered close to the ground. You may also hear hissing and growling as a means of intimidation.

On the other hand, a defensive cat adopts a more protective pose, lowering into a crouched position and wrapping its tail around them as a form of protection. Its pupils will still be dilated, but its head will be tucked in towards the body and its ears flattened against the top of its head.

If you spot any of the above, don’t go near or touch your kitty! They are best left alone until they have calmed down or you could risk getting bitten and attacked.

What Should I Do If My Cat Bites Me?

Although we do our best to stop cat attacks, sometimes your cat may still bite you. If this happens, you need to know what to do. Here’s a quick checklist you can turn to if you do ever suddenly get violently attacked by your cat:

Most importantly, never punish your cat – either physically or by scolding – if they bite or scratch you. This will only give them more reason to feel fear, which can make their aggressive behavior worse. Besides, some cats will see this as a challenge and may lash out more in the future.

Instead, simply get up and walk away if they are not leaving you alone. You can also try rewarding your cat with good behavior, or speak to your vet as mentioned. They can refer you to a specialist in behavioral therapy to help resolve your cat’s anger issues.

Unprovoked aggression in cats is common and can have nasty and painful consequences! When my cat attacks me violently it isn’t nice, but when she attacks children or guests in my home the outcome is even worse. She never means to cause harm, but is usually scared or feeling territorial.

However, these aren’t the only two causes of aggression. Your cat may be redirecting their aggression towards you or a young and playful cat might think you’re a toy. Medical conditions, overstimulation, and maternal instincts are all also linked to aggressive behavior, and understanding the cause is key to finding the solution.

Having shared the ways that I stop my cat from biting and attacking me, you should find this article useful. Try taking some of them on board and see if there is an improvement in your cat’s behavior. If not, don’t hesitate to call your vet for advice!