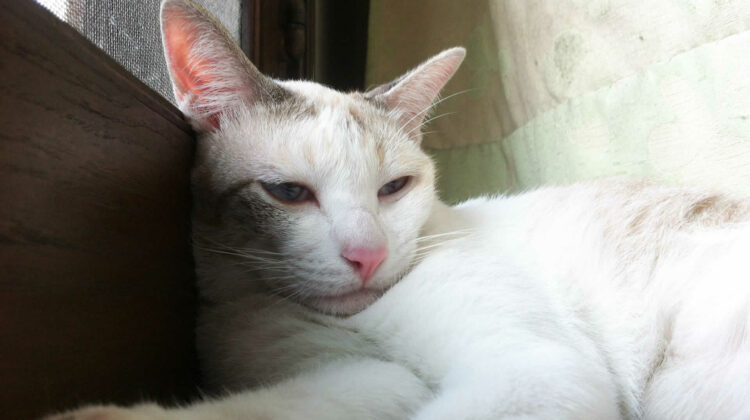 All cats vomit occasionally, and vomiting takes many different forms.

Bile is a yellow or green substance produced by the liver that helps cats digest the food they eat. When cats vomit on an empty stomach, sometimes all they throw up is this disgusting yellow liquid.

First seeing your kitty throwing up bile is pretty alarming. But it’s when you see your cat throwing up bile for three days that the panic truly starts to set in. Is something seriously wrong with your furry friend? When is it necessary for veterinary intervention and is professional treatment needed?

There are many reasons cats throw up bile, including indigestion, stomach irritation, kidney problems, liver disease, and gallbladder inflammation. I run through all these causes and potential treatment options in this article. Keep reading to discover how to help your kitty and put your mind at ease.

Why is My Cat Throwing Up Stomach Bile?

Cats that vomit on an empty stomach often throw up bile. This is the only substance in their stomach, so it is the only thing they can vomit up! Therefore, you’re most likely to see your cat throwing up bile in the morning or evening when its stomach is at its emptiest.

There are several underlying conditions that could cause vomiting in cats.

Here are the top eight culprits to be aware of:

Cats with bilious vomiting syndrome (BVS) throw up bile after a period of not eating. Vets believe this happens as tiny amounts of bile reflux back into the stomach. When the stomach contains food, this bile leakage doesn’t cause any harm. Yet when the stomach is empty, the bile irritates the lining of the stomach and causes your cat to start retching.

As your cat doesn’t have any food in its stomach, it throws up the only thing there… bile! The yellow vomit is sometimes a little foamy and usually happens in the morning or evening. Cats with BVS throw up bile daily whenever their stomach gets too empty.

Like humans, some cats suffer from indigestion. Also known as acid reflux, indigestion is caused by the stomach fluids (bile, stomach acids, and gastrointestinal juices) flowing upward into the esophagus. This causes inflammation of the esophagus, resulting in pain.

Indigestion can also give your cat an upset stomach, leading to your cat throwing up undigested food. Eventually, this might mean your cat completely loses its appetite, and throwing up on an empty stomach causes your cat to vomit bile. Constantly throwing up bile makes your cat’s indigestion worse, forming a vicious cycle!

Stomach irritation, also known as gastritis, can lead to cats vomiting. I have already mentioned how BVS can irritate the stomach lining, but gastritis can arise from many different things. Most commonly, it is caused by cats eating something they shouldn’t. My cat used to do this all the time when a curious kitten, but has thankfully calmed down in her old age.

Aside from vomiting, the most common clinical sign of stomach irritation is a sudden and extreme loss of appetite. This empty stomach means your cat stops throwing up partially digested food and starts vomiting bile. If this happens for three days or more, your cat is at a high risk of dehydration.

Chronic kidney disease (CKD) occurs when the kidneys stop functioning as they should. This dysfunction leads to a buildup of toxins in the body and difficulty concentrating urine, resulting in various symptoms. Unfortunately, many of these clinical signs are subtle to begin with, and CKD only becomes more apparent in the later stages.

Vomiting bile is one of the later-stage symptoms of CKD. This is caused by increased stomach acid in cats with renal disease. The increased amount of acid causes stomach ulcers, leading to gastritis and vomiting. As more acid is present in the stomach, the vomit is often yellow-green bile or foamy liquid that lasts several days.

Most cats love food and even go as far as begging for their owners to feed them. However, anorexia is an issue in some cats. Rather than being caused by a fear of weight gain, feline anorexia is usually caused by an underlying condition that makes cats nauseous. Stress or cats being “picky eaters” can also cause them to eat less than they should.

Because cats that throw up bile have empty stomachs, anorexic cats will likely throw up bile every time they vomit. Their belly is always empty, so bile is the only thing they can cough up! Other signs of anorexia are a refusal to eat and weight loss.

Endocrine diseases refer to all disorders caused by disrupted hormonal pathways or over or underproduction of a hormone. Hyperthyroidism is one of the most common feline endocrine diseases caused by increased thyroid production. Diabetes is another typical example in cats.

Both of these conditions cause vomiting. For cats with hyperthyroidism, vomiting is caused by altered gastric mobility and increased metabolism. For diabetic cats, vomiting is typically triggered by low blood sugar levels, known as hypoglycemia. If your cat throws up until its stomach is empty, its vomit will solely consist of bile.

When damage occurs to the liver, cats can develop liver disease. The liver is involved in many functions, including bile production. As such, the clinical signs of cats with liver disease are varied. They often include yellowing of the skin, loss of appetite, and general weakness.

Vomiting is another potential symptom. If your cat is sick frequently enough and for three days or more, its stomach contents quickly deplete. Coupled with a loss of appetite, this can cause your furry friend to throw up bile regularly.

The liver produces bile, but the bile is then stored in a second organ: the gallbladder. The bile remains in the gallbladder until your cat ingests food. The ingestion of food stimulates the gallbladder to contract and release bile into the stomach and small intestine to aid digestion.

The gallbladder can become inflamed, known as cholecystitis. There are several causes of cholecystitis, including bacterial infections, diabetes mellitus, or parasites in the bile duct. The inflammation can cause an excessive release of bile and vomiting for three or more days. In other cases, bile secretion is reduced, impairing digestion and leading to vomiting.

Finally, your cat might throw up bile when trying to cough up a hairball. Hairballs are a normal part of being a cat. As your cat grooms itself, its hooked tongues catch loose hair from its fur coat. Some hairs are accidentally swallowed and accumulate along the GI tract. Depending on the size of the hairball, it might take a while for your cat to cough one up successfully.

While retching and gagging, your kitty may also throw up bile. When the hairball finally makes an appearance, it too will often be accompanied by foamy, yellow liquid. A hairball now and again is nothing to worry about, but a cat throwing up hairballs daily should see a vet.

Should I Worry if My Cat Throws up Bile?

Nearly every pet parent has witnessed their cat throwing up before. From eating something it shouldn’t to coughing up hairballs, vomiting is a diverse and common symptom. Therefore, it can be difficult to know whether or not you need to call a vet for professional help.

If any of these apply, there might be a serious condition causing them to vomit foamy, yellow, or green liquid. Conditions such as liver disease and kidney failure are particularly urgent. These conditions are progressive and life-threatening. Prompt treatment from a trained professional significantly improves the outlook for your pet.

Even if nothing is wrong with your furry friend, it doesn’t hurt to get professional advice. After all, it’s better to be safe than sorry when your cat’s health is on the line.

Treatment for Vomiting with Bile in Cats

Vomiting up bile occasionally subsides on its own. However, cats that have had a stomach upset for several days generally require medical intervention. Treatment is varied depending on the conditions held responsible for this symptom. Your cat may need a short course of treatment, life-long medication, or surgery.

You can also make changes at home to help ease your cat’s stomach. Several months back, I switched from dry kibble to a wet cat food for sensitive stomachs, and it has dramatically improved my cat’s symptoms. Your vet may recommend a similar dietary alteration, so ask for their opinion.

Changing when you feed your cat can also help ease symptoms. As I have already mentioned, vomiting bile occurs when the stomach is empty. Instead of feeding your cat once in the morning and evening, why not split their food between several smaller portions delivered throughout the day? This way, your kitty’s stomach will be fuller for longer!

Occasional vomiting is nothing to stress about. Unfortunately for us, it’s just a normal part of caring for your cat! However, throwing up bile is more concerning as it means your cat has an empty stomach. If you see your cat throwing up bile for three days or more, this is even more reason to worry.

This article lists nine possible reasons for this symptom, but this should not replace professional veterinary advice. Take your cat to the vet as soon as possible for a diagnosis so your furry friend can start an effective treatment plan. With your cat’s health on the line, don’t hesitate!