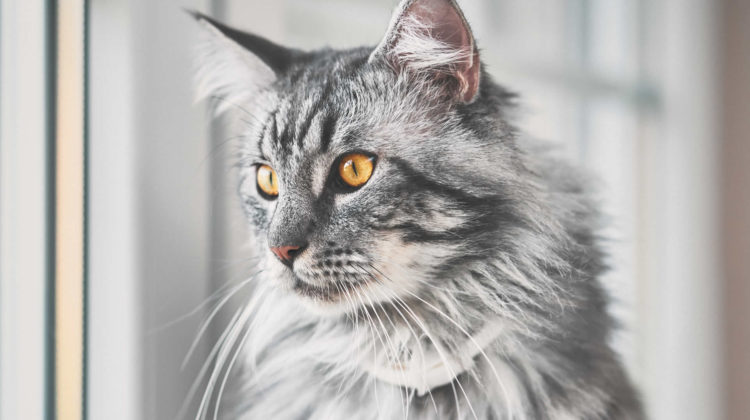 Whiskers are an important part of a cat’s anatomy, helping them judge distances and understand the size of objects to help them navigate, especially in the darkness. They are also sensory organs and can detect movement, perfect for hunting prey or detecting danger.

You may have noticed that some breeds of cats have whiskers that are much longer than others. It is usually large long-haired cat breeds that have long whiskers, such as Maine Coons who hold the current record for the longest whiskers on record. There are also some other close contenders though.

In this article, I will run through the top 5 cat breeds with long whiskers and why these bits of hair are so essential to a cat’s survival. Plus, I will talk about why some cats have such long whiskers, and why you should never cut them, no matter how long they grow.

What Cat Breeds Have Long Whiskers? 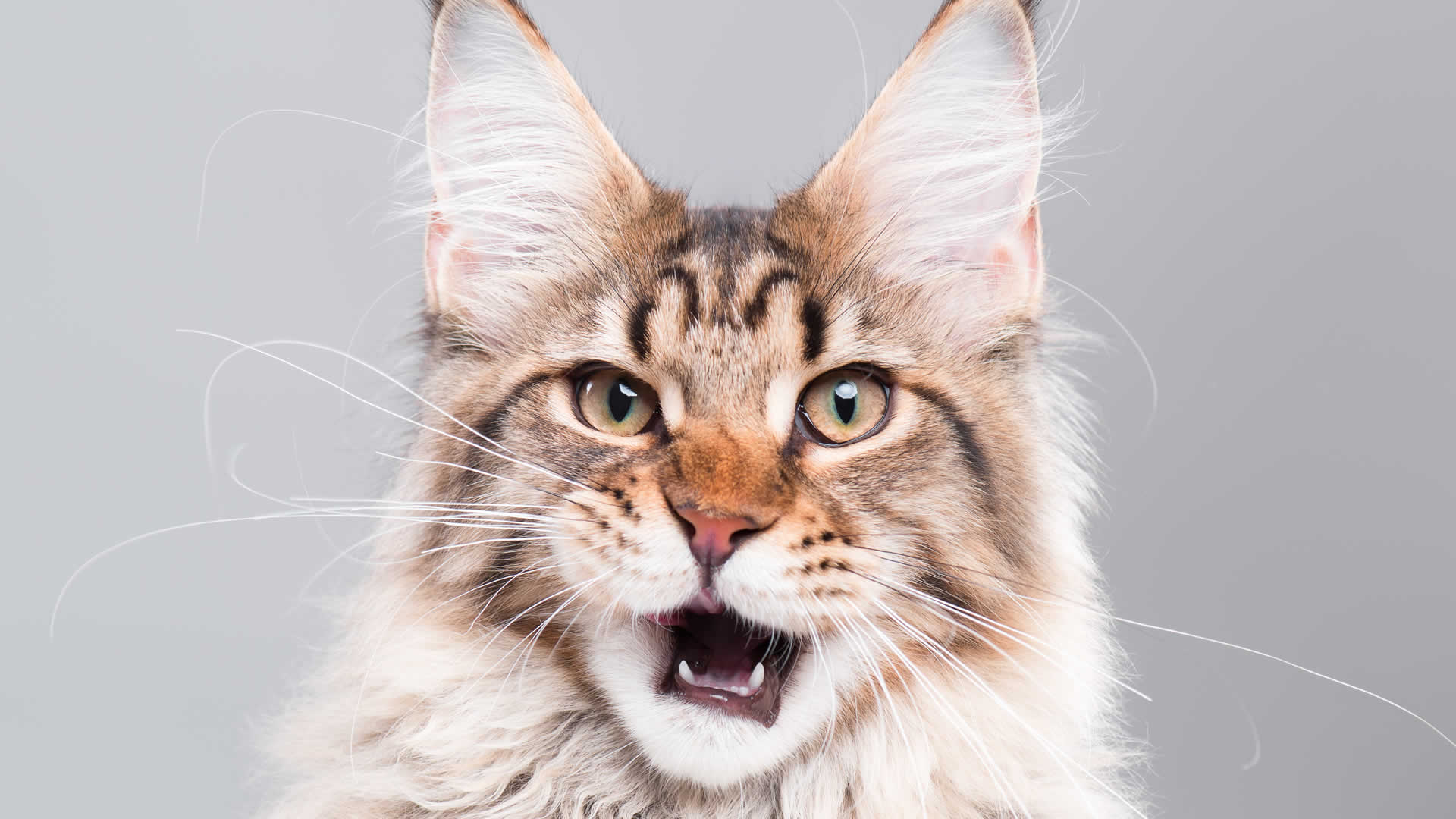 This should come as no surprise seeing that Maine Coons are the biggest of all domestic cat breeds. They’re cats with long tails and limbs, and they can easily grow to over 3.2 feet in length, weighing over an astonishing 24lbs! With everything else about them being extra-large, it makes sense that their whiskers are too.

Whiskers are also made from a specialized type of mammalian hair that is longer, coarser, and thicker than regular hair, with roots that are three times deeper. As Maine Coons are characterized by their long and thick fur coats, it again makes sense that these ginormous fluff balls have the longest whiskers going. 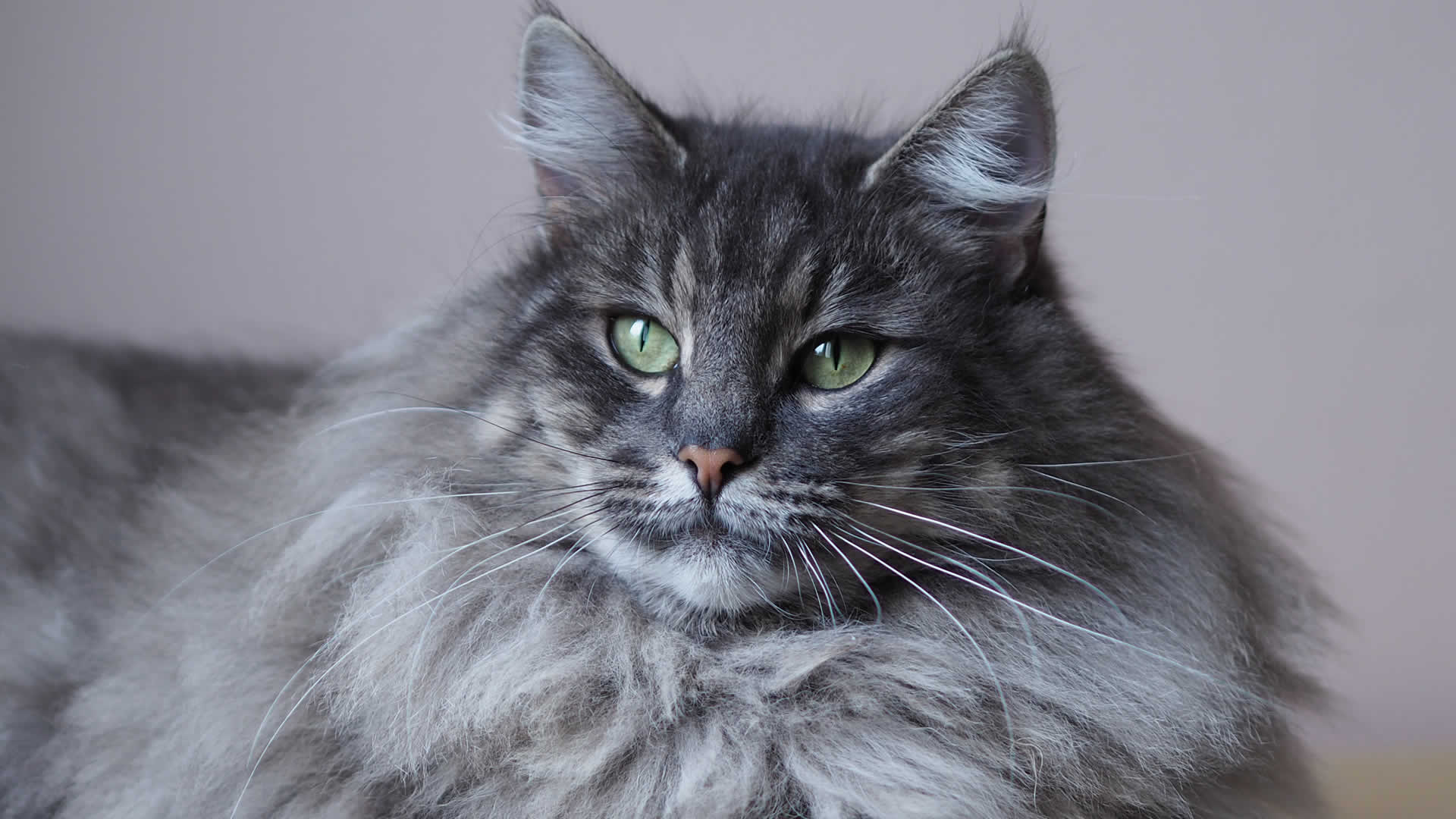 Another extra-large long-haired breed is the Norwegian Forest Cat. In fact, many people struggle to know the difference between these two huge teddybear cats. Both have thick long coats and while Norwegian Forest Cats are slightly smaller than Maine Coons, the males can commonly weigh up to 20lbs.

It therefore follows that these cats have similar whiskers to Maine Coons and you will often find long whiskers protruding from the face of this breed. In fact, the whiskers on your cat’s face are typically about as long as your cat is wide. This is so that their whiskers can do their key job of helping them determine whether they can fit through a tight space or not. So, the bigger the breed, the bigger their whiskers! 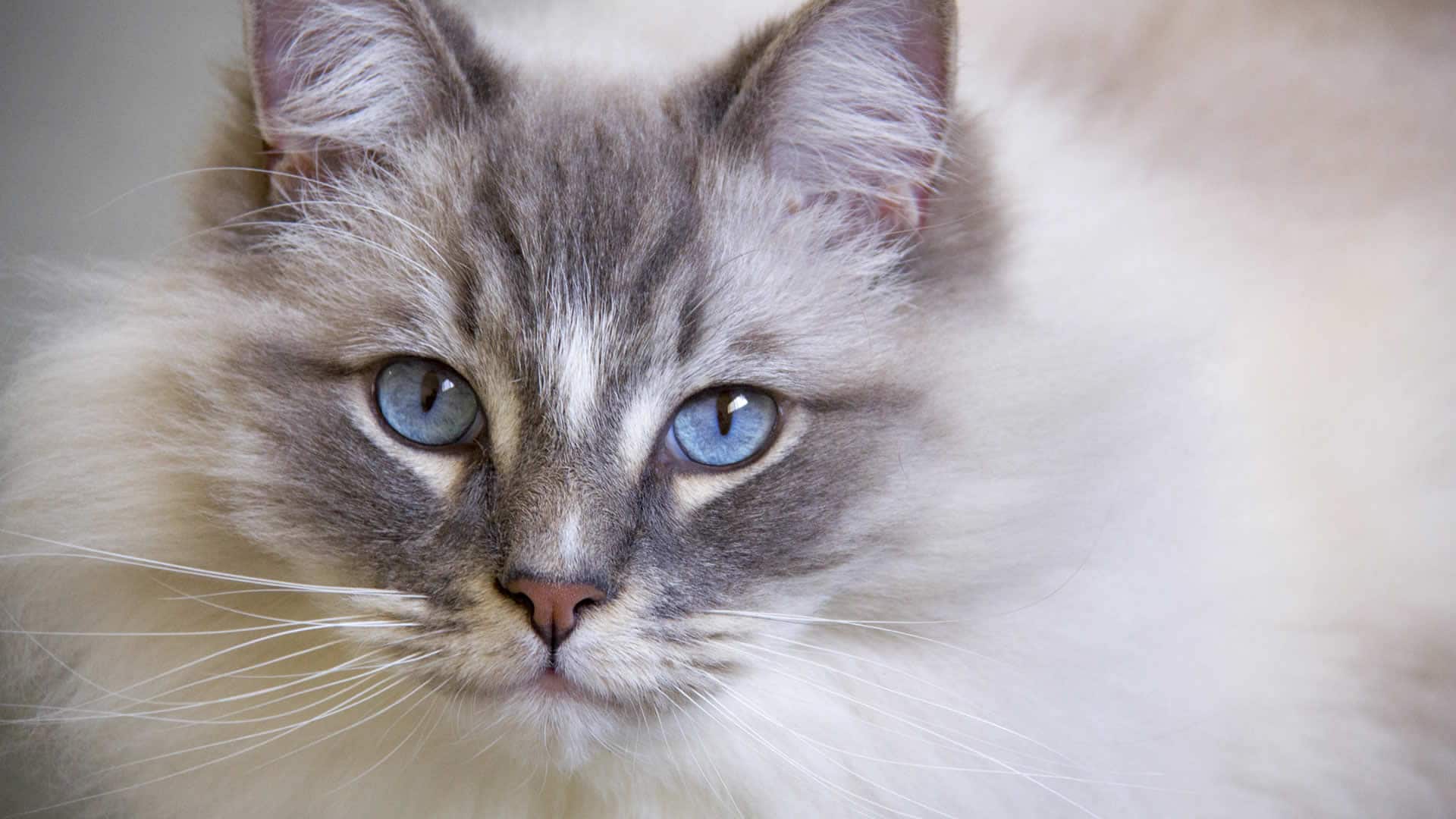 Ragdoll cats are another large breed with a beautiful and soft plush coat and therefore are also likely to have longer whiskers than smaller short-haired breeds of cat. Male Ragdolls are significantly larger than female Ragdolls, weighing up to 20lbs! For this reason, it is also more typical to see longer whiskers on a male than a female.

Ragdolls are also known for being one of the most laid-back cats with an extremely relaxed temperament. That’s why they have the name “ragdoll” as they have a distinct floppy ragdoll impression. However, this could also affect the length of their whiskers, or at least how long we perceive them to be.

This is great for understanding your cat’s body language, which you can use hand-in-hand with the position of their ears and tail to determine how they’re feeling.  However, this could also partially explain why Ragdolls appear to have such long whiskers too. Their permanently relaxed temperment means we often see their whiskers looking their longest. 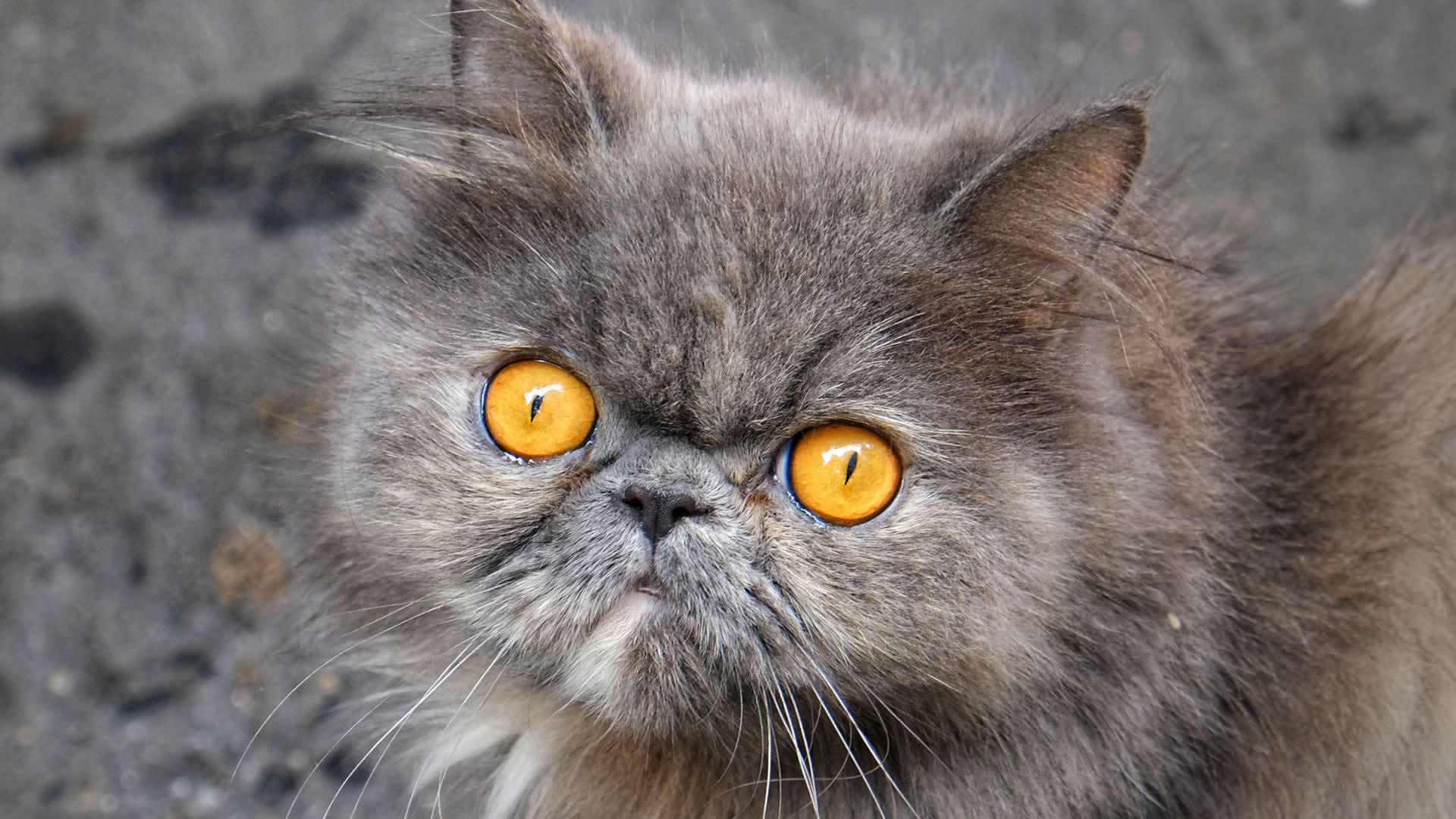 Although Persian’s aren’t the biggest of cats by a long shot, they are still a lot bigger than most and weigh around 12lbs on average. Plus, their extremely long and thick coats give them a much larger appearance than they would have otherwise.

Interestingly, a cat’s whiskers are as long as their body is wide regardless of whether this width is because of their actual bone structure or just an illusion of being larger than they are, like Persians with their luxurious fur coats. Therefore, Persians also typically have longer whiskers than most other cat breeds. 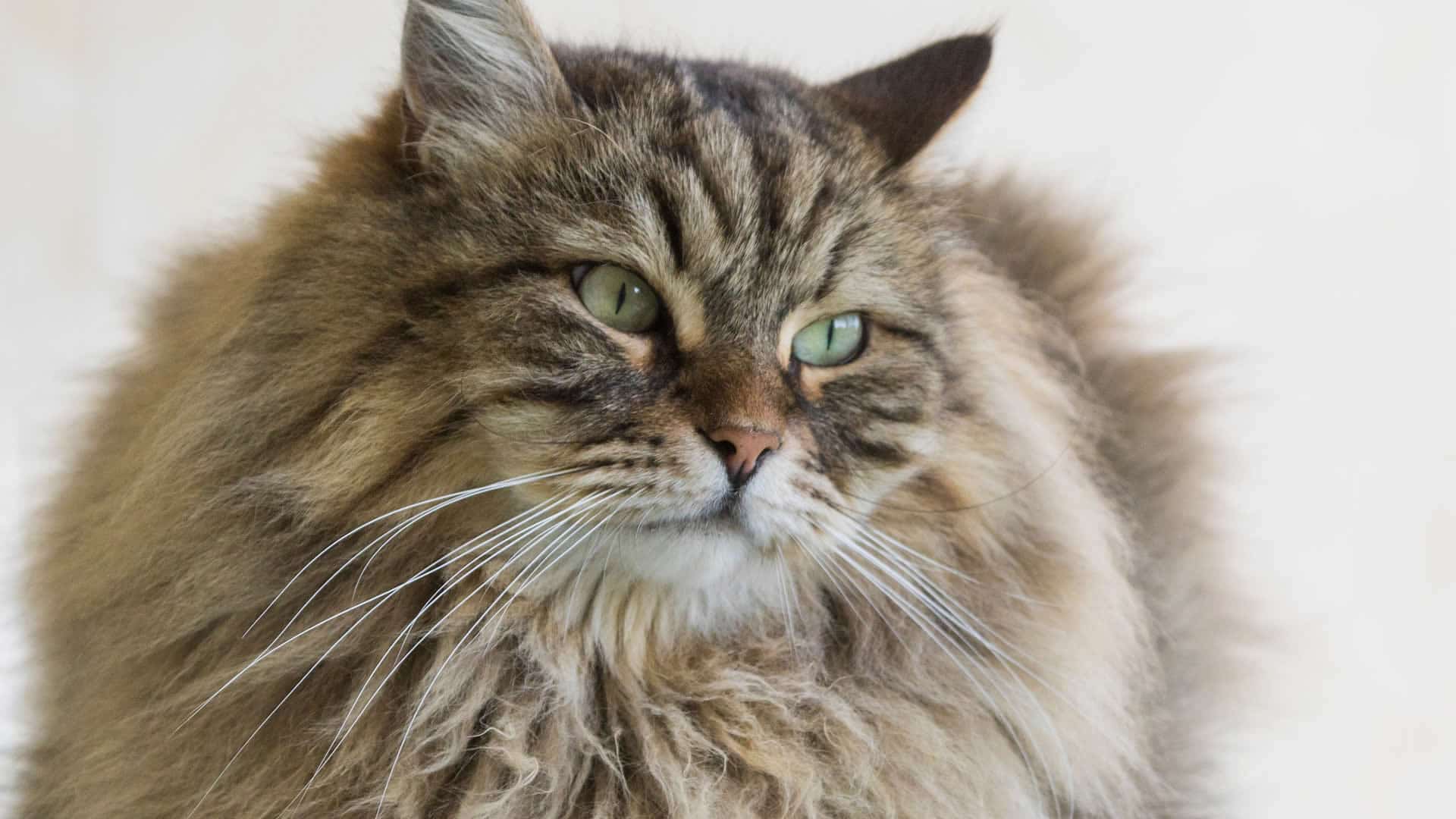 Another cat that is known for its relatively large size is a Siberian Cat, which can weigh up to 26lbs. Because of this large size, Siberian cats also have some of the longest whiskers to help them identify which spaces their bodies can squeeze through.

They have a long thick coat designed to keep them warm in Russia’s cold climate, and this breed is now believed to be an ancestor of all long-haired breeds. In particular, there are many similarities between the Siberian and Norwegian Forest Cat, so it follows that these cats too have long whiskers.

As whiskers are thicker and coarser than the rest of the fur that makes up your cat’s coat, breeds of cats like the Siberian that have an extremely thick and long coat have even thicker and coarser whiskers than is typically seen too. This may make them more noticeable than other cats with thin and curly whiskers, such as the Devon Rex, giving the illusion of added length.

Why Do Some Cats Have Long Whiskers?

The length of your cat’s whiskers is directly linked to the size of your cat.

One of the main uses of a cat’s whiskers is to help them determine whether they can fit through a small space without getting stuck. This explains why whiskers are strategically located on your cat’s face too, as this will be the first part of them that would go through a small gap.

A cat’s whiskers are not only proportional to the size of their bodies but also their fur. Therefore, extremely fluffy cats with thick coats are more likely to have longer whiskers. Plus, cats with thicker coats will also have thicker whiskers, which can give the illusion of added length and thickness.

However, you will also notice that “large cat equals large whiskers” is just a generalization.

Yes, Maine Coons do typically have longer whiskers than smaller shorthaired breeds such as a Siamese, but a large long-haired cat could have small whiskers and vice versa. This is down to genetics and what genes it has inherited from its mother and father.

We can see this more in domestic longhair and domestic shorthair cats, which account for the majority of cats in the US and are not a breed of cat. Instead, they are non-breed classifications of a mixed-breed cat and so have much more mixed ancestry. These cats come from a huge gene pool and could have picked up characteristics from a huge range of different breeds.

Genetics plays a large role in every physical aspect of a cat, not just the length of its whiskers. For example, genetics is the reason that longhaired and shorthaired cats exist, cats with curly tails, cats with different colored coats, different colored eyes, and everything in between!

Why Do Cats Need Long Whiskers?

Although there is no ideal length that a cat’s whiskers should be, they do need whiskers that are the right size for them to help them navigate the world around them. This is largely because cats have such poor vision and so rely on their whiskers to tell them information about their surroundings that their eyes cannot pick up.

As I have already mentioned, the primary function of whiskers is to determine how large a space is and whether the cat can fit there. It is no secret that cats love cozy spaces like cardboard boxes. But, before climbing into any tight spot like this, their whiskers will let them know whether it is possible or not. This is true for many small spaces that cats climb through every day, such as their cat flap and holes in the garden fence.

Whiskers can also be used to determine jumping distance by feeling their air with their whiskers and determining whether or not it is safe before taking the leap. This is essential for a cat’s survival, helping them jump and climb safely.

Cats have notoriously poor vision which only deteriorates as cats age. Thankfully, their whiskers can help them navigate a poorly lit room, and the longer the whiskers, the better they can do this. If your cat has whiskers that are longer than its body is wide, they will know an unseen object is there before they bump into it.

Cats can also use their whiskers to sense the movement of their prey up close where their vision is its poorest. If the mouse or other small animal manages to get away, your cat can also track it back down again by using its whiskers to detect tiny changes in the air pressure. The longer the whiskers, the better your cat will be at hunting, and they will likely be more involved in playtime too.

Cats can also use the changes in air pressure to detect danger and oncoming predators, ensuring that they don’t end up as another animal’s dinner either!

Can I Cut My Cat’s Whiskers?

Many people wrongly assume that cats’ whiskers are just like the hair on our heads. They think you can trim whiskers and they will grow back without causing any harm.

However, no matter how long your cat’s whiskers get, you should never try to trim or remove them.

Whiskers play a vital role in a cat’s sensory abilities, and almost 40% of the brain’s sensory area aligns with whiskers. So, removing a cat’s whiskers is comparable to wearing a blindfold permanently or losing your hearing for good. Without them, they will become confused and disorientated. In fact, cats with no whiskers or whiskers that are damaged can have a range of problems including:

Alongside these problems, there are also psychological issues that accompany whisker removal. It is extremely cruel and traumatic for a cat to go through and will make your cat miserable and unhappy. If you trim their whiskers each time they get too long, they could even start avoiding your altogether so that you cannot cut their whiskers off again!

If you have a cat breed with long whiskers, you have to let them grow at their own pace and appreciate that your cat relies on these whiskers for so many things.

Why Do My Cat’s Whiskers Break Off?

If a cat’s whiskers are so vital to their lives, should you worry if their whiskers start to break off?

You’ll be pleased to hear that losing whiskers is a natural part of their lifecycle. Whereas having all their whiskers cut off in one snip will make them extremely disorientated and confused, losing the odd whisker here and there is nothing to worry about. The breakage will not cause any physical pain and their whisker will grow back over time.

Here are some of the common reasons as to why whiskers may break off:

The cat breed with the longest whiskers is a Maine Coon, whose large size means their whiskers must be longer to help them accurately determine whether they can fit into a small space. Missi, a Maine Coon from Finland, holds the current world record with whiskers that are 7.5 inches long!

Other breeds with long whiskers include Norwegian Forest Cats, Ragdolls, Persians, and Siberians, all of which are other large long-haired breeds. In fact, the size of your cat is the most important decider when it comes to the length of its whiskers. The fluffier and bigger your cat, the larger their whiskers will be!

Even if you think your cat’s whiskers are growing too long, you should never trim them. If they are too long, the whiskers will fall out by themselves and new ones will grow in their place. However, losing all their whiskers at once is extremely distressing and should be avoided.