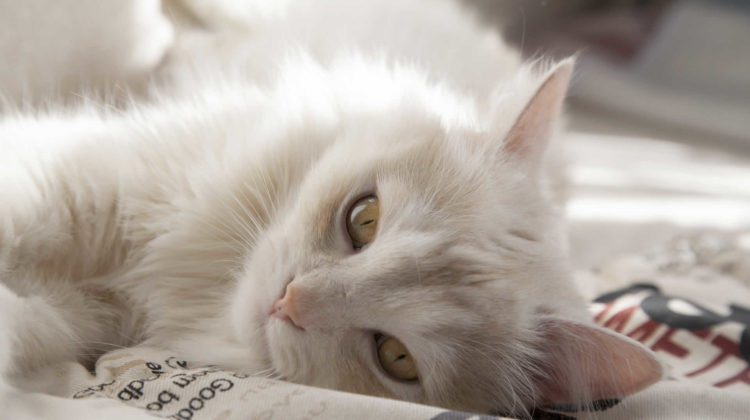 Cats are marvelous creatures that bring a daily dose of happiness to our lives. However, understanding our cat’s wants and needs can sometimes be difficult.

Cat’s can communicate how they feel to us by speaking, and instead, do all their talking through body language.

One thing you may have seen your cat doing is thrashing and thumping its tail. Interestingly, your kitty isn’t flicking its tail for no reason, it is trying to tell you something! But what are they trying to communicate? Why do cats thump their tails when lying down? It turns out that cats thump their tails for all kinds of reasons. They could simply be saying hello, or they could be excited, frustrated, annoyed, or in pain.

In this article, you’ll get familiar with the multiple meanings of a beating tail, and you’ll see how to differentiate them. I have also included other typical tail moves that you may have seen by now, but aren’t sure what they mean. The more you understand your furry friend, the more you’ll learn to respect their boundaries and their mood.

Reasons Cats Thump Their Tails When Lying Down

You can’t always know what your feline wants to say, but you should try your best to understand. So, it’s time to learn more about their tail movements and find out why they keep thumping the tail while laying down. For example, I know that when my cat flops down in front of me, it’s trying to show love. But, when she’s angrily beating her tail on the floor, it’s an entirely different story!

Let’s find out all the different meanings of a thumping tail so you can better understand and care for your cat.

Cats are intriguing creatures and have many ways of saying hello, one of which is by thumping their tails when they’re lying down. Although this is not the most common way to say hello, it’s the easiest for them when they’re on the floor and don’t want to get up.

After all, felines are lazy, and getting up to greet you sounds like a lot of work! They may also decide not to get up as they are comfy and want you to go to them instead. Therefore, they’ll just keep laying where they are and start thumping their tail as a way to attract your attention and say hello. The best way to recognize that the feline wants to say hello to you is to check whether they look comfy, relaxed, and happy as they thump their tail.

2. They Want To Play

There’s nothing cuter than a playful cat. If you see yours laying on the floor on their stomach while beating and wagging their tail, the chances are it wants to play. Your feline maybe saw something moving that channeled their playful instincts, or perhaps they simply want to play with you!

You’ll recognize a playful cat because it will be moving its bottom from side to side while it’s thumping its tail. Their eyes will also be focused on the item of interest, and the feline will be ready to jump and play at any second. This is the perfect time to take out the cat toys so your little boy or girl can find a way to use all their extra energy. Plus, playtime is great bonding time and helps to keep your cat fit, healthy, and happy.

Your cat may also be thumping their tail when lying down as they have seen something that interests them. When a cat finds something captivating, it can start beating its tail. For example, your furry friend may see a large box or a bag that they’re curious to see what is inside. Your cat will point all its attention to the object and start moving its tail.

This is a common occurrence, and you shouldn’t be surprised when the cat will storm to inspect the object of interest up close a few seconds later. This is very similar behavior to a feline being playful. The only real way to differentiate is by looking closely at what your cat’s attention is on.

A beating tail can also be a sign of a frustrated cat. Thankfully, it is easy to differentiate between a happy and frustrated cat. Expect the cat’s tail to thump more aggressively and swish from side to side while they’re on the ground when they’re frustrated. They will also be more alert and on edge.

Sometimes it will be easy to know the reason why they’re frustrated, whereas other times you’ll be left without an answer. For example, the reason why your cat is angry might be because you interrupted a cozy sleep session or simply because it’s not their best day.

If you know what caused the frustration, you can try removing the trigger to help them calm down. However, whenever a cat shows signs of anger or frustration, you should stay away from them. If you decide to pet your furry friend now, there might be consequences. Since you don’t need any aggressive scratches, just let the cat rest – they’ll calm down in their own time.

What if you’ve been trying to figure out for hours why cats thump their tails when lying down, to only find out that they’re just chilling? If your cat looks relaxed while beating the tail, that’s because she probably is! There might not be another reason behind the thumping, just pure satisfaction, and happiness. Your cat could just be enjoying laying on the floor without doing anything. If you pet your cat, it may start purring and thumping even harder!

Your cat could also be thumping its tail as it is feeling excited. I often see my cat beating her tail when she gets excited over seeing a bird outside the window, and your cat may do the same. They’re probably imagining themselves with the little birdie in their claws and getting more thrilled every second. You will probably hear sounds together with the beating tail – that’s just your cat trying to get the bird’s attention.

You may also see your cat get overly excited if you have another pet in your home, like hamsters, guinea pigs, or birds. Felines see these animals as prey, and so can get excited and start beating their tail on the floor. At the same time, it can begin thumping from side to side, point the stare at the animal, get in a crouching position.

This is a very similar situation to the one with outdoor birds. However, it’s a more dangerous one as it could end up with another of your pets being killed! To protect all your pets, keep an eye on them and take all the necessary safety measures.

Another reason for a thumping tail could be that your cat feels threatened. Cats usually feel threatened and beat their tales during games with other cats or when there’s about to be a confrontation. They can get very impatient, angry and start thumping and wagging more aggressively.

Although it’s not nice to think your kitty is feeling threatened, it is normal behavior. It is also one of the easiest reasons to spot as it comes with several other moves. When feeling threatened, your cat’s tail will start moving side to side, its ears will be erect, and it will have its eyes on its opponent. Most of the time, cats will also turn sideways before an attack to appear bigger to their competition.

8. You Crossed A Line

Your cat could also be thumping their tail when lying down as you crossed a line. Of course, you would have done this accidentally. However, cats can get anxious and annoyed if we pet them for too long, and testing the patience of your cat is never a smart idea! If you have been petting your cat for a while and you notice it start to wag its tail, it’s time to move your hand. Otherwise, you can end up with bite marks and scratches from an overly-stimulated cat.

Unfortunately, a thumping tail can also point out to a cat that is struggling and is in pain. In this case, you won’t be able to find any other reason, such as being playful, frustrated, relaxed, or excited. The thumping motion might not be continuous, but it will most likely appear as an unwanted reflex. Cats don’t like showing weakness, which is why you’ll find it hard to figure out when there’s something wrong with them.

Other signs that can tell you your feline might be experiencing pain are an arched back, low appetite, aggression, or increased lethargy. If you notice any of these symptoms, ensure to take your feline to the vet so they can get the help they need.

Lastly, your cat could be moving their tail for no real reason – they could just be fast asleep! If you know that your cat is sleeping on the ground and you suddenly see soft thumping, it’s just a random movement. Felines aren’t always calm while sleeping. They can sometimes move their tail, slightly thumping and beating it on the floor. Your furry friend is probably just dreaming of a bird they’re about to catch!

Thumping is just one of the many tail movements that you may see your cat doing. However, to fully understand your feline, it is a great idea to look at what other tail movements mean too. Here are some other common ones you should be aware of:

So, why do cats thump their tails while lying down? Some of the most common reasons include the cat being relaxed, excited, frustrated, in pain, interested, or angry. They may also be asking you to play, saying hello, or simply sleeping! Yes – an entire palette of emotions in a few tail thumps! However, as long as you follow the other body changes, you should know what your cat is communicating.

Now that you know what thumping can mean, there are also several other movements to learn too to fully understand your furry friend. I made sure to list those above so that you can be more familiar with your cat’s behavior and know what to do in certain situations. Who knew that a cat’s tail could say so much without actually saying anything!