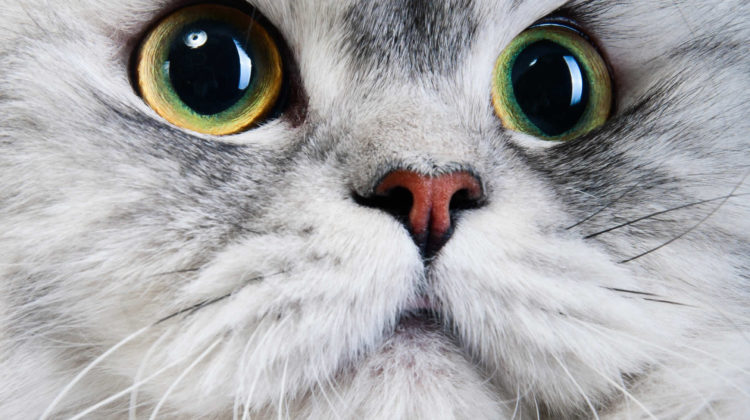 Cats are beautiful little creatures. They have glossy fur coats over nearly their entire body. They have long protruding whiskers extending from their face. Yet, there is one area where we humans have hair that cats seem to be missing… eyelashes! It got me thinking, do cats have eyelashes?

As it turns out, cats technically do have eyelashes. However, they are different from the human eyelashes that we have. They aren’t long, fluttery, or well-defined, and so a cat’s lashes easily blend in with the fur covering their face. This gives the illusion that there are not present and makes them less obvious to any onlooker.

There are, however, exceptions to this rule. Whether a cat has eyelashes or not also depends on the breed! In this article, I will answer all your questions about cats and their eyelashes. Plus, I’ll explain why cats’ lashes are so different from ours, and any feline lash-related medical conditions you should be aware of.

The question “Do cats have eyelashes?” has been a hot topic of debate among cat owners.

Some pet parents swear that their feline has long, voluptuous eyelashes, whereas others claim there are none there at all!

However, the answer to this question is easy: yes, cats do have eyelashes.

Eyelashes are defined as a row of stiff hairs called cilia that grow on the upper and lower eyelids, which cats have. However, they aren’t what we expect, which explains the reason for the difference in opinion. People have very long eyelashes that can clearly be seen. In fact, having long, dark, curly lashes is seen as a thing of beauty in many cultures.

Long lashes are not exclusively reserved for humans either. Many other mammals also have defined eyelashed extending from their eyelids. Think of a horse, camel, and cow. To us, it is clear that each of these animals has eyelashes as we can visibly see them. Yet, with cats, this isn’t the case and often there are no obvious strands of hair.

Why Are Cat’s Lashes Hard to See?

One reason it is more difficult to see eyelashes on a cat is that they have fur over their faces, and have particularly thick hair around their eyes. This can make their eyelashes blend in with the rest of their coat. Many owners mistake their cat’s eyelashes for just the fur on their faces.

Secondly, cats’ eyelashes are much shorter than what we typically think of, and are no longer than the rest of their fur. This means that long-haired cats such as Maine Coons, Persians, and Ragdolls may have more obvious eyelashes than short-haired cat breeds. The longer the eyelashes, the more noticeable they are.

It is also important to mention hairless breeds such as the Sphynx cat. These cats are the exception to the rule – they have no eyelashes at all. This should come as no surprise as they have no hair on their entire body. In fact, they’re even missing their whiskers! The same is true for other hairless breeds, as well as Devon and Cornish Rex cats which are known for their curly coats.

However, unless you have a hairless cat or Rex breed, your kitty will have eyelashes – they just may be a little difficult to see.

As with everything in nature, there is a specific function of eyelashes. In humans and many other animals, their purpose is to protect the eyes and act as a barrier against dirt, dust, and bacteria. If any debris got into our eyes, it could cause us harm, but our eyelashes make this less likely. They curve away from our eyes rather than being straight to further help keep any dirt away.

Secondly, eyelashes also let us know when something is coming towards our eyes. The hairs are extremely sensitive and act as an extension of our eyes. When we feel something nearby, we can quickly close our eyes shut to prevent whatever was near from poking us in the eye.

Although most cats technically do have eyelashes, their short length means these two functions aren’t carried out by their lashes. But isn’t this dangerous for cats? Don’t cats need long and defined eyelashes to help protect their eyes?

Interestingly, cats have evolved to have such small and nearly non-existent eyelashes because they have several other forms of protection instead:

What Is the Third Eyelid?

A cat’s whiskers and their fur coats are pretty self-explanatory, yet the third eyelid needs a bit more explaining. A third eyelid is scientifically known as a nictitating membrane. This is a thin and translucent membrane that sits in the inner corner of your cat’s eyes. You may have seen the edge of her third eyelid when she wakes up from a nap or is in a very relaxed state.

However, it can be drawn out to cover her entire eyeball and acts as a layer of protection, preventing any dirt and debris from entering the eye. The third eyelid is also well lubricated and can remove any debris from the eyeball. It also helps to keep their eyes moist and lubricated, a necessity for healthy eyes and good vision.

As the membrane is translucent, cats can also still see relatively well when the membrane is stretched across the surface of the eye. This means cats can extend their third eyelid when walking through bushes, for example. By doing this, they protect their eyes from any twigs, dust, and dirt, but can still see where they are going.

Interestingly, humans used to have a third eyelid. Do you see the little pink bit in the corner of your eye? That’s the remanence of it! Although we no longer use the third eyelid, it doesn’t cause us any harm and so hasn’t been bred out of the population.

Although cat’s eyelashes are not long like ours, nor necessary for protecting their eyes, there are a few medical conditions associated with eyelashes. These are not fatal and are extremely rare in cats, which explains why these disorders are not enough to have bred eyelashes out of the feline population. However, they can contribute to more severe eye conditions.

All feline eyelash disorders are caused by hair growing in abnormal places. This causes the lashes to come into contact with the surface of the eye, causing damage or irritation. The conditions can be split into three distinct eyelash disorders depending on where the abnormal hair growth is occurring:

If your cat is suffering from one of the above disorders, you may notice that they blink excessively and that their eyes are red and swollen. They may also paw at their eyes and there will likely be discharge from the eyes or an excessive production of tears. If you notice these symptoms, take your cat to the vet so they can treat the condition.

Which of the three eyelash disorders your cat has will depend on the treatment given. With trichiasis, cutting the eyelashes back is usually effective, and distichiasis can often be treated by plucking the eyelashes responsible for causing irritation. However, if the eyelashes quickly grow back or if your cat has ectopic cilia, they will need to undergo surgery to have the hair follicles removed.

Cats will typically recover quickly from surgery, and you must get their eyelash condition treated. When their lashes touch and irritate the eyeball, it can lead to corneal ulcers and other more severe eye conditions that you don’t want your kitty suffering from!

So, do cats have eyelashes? Despite what many pet parents think, cats do have eyelashes! Their eyelashes may be shorter than ours, less distinctive, and easily blend in with their fur coats, but they are still there nonetheless. The one exception is with hairless cats who are lacking these stiff, curved cilia on their eyelids.

Interestingly, although most cats have eyelashes, they don’t need them. Cats have their fur coats and whiskers to help prevent debris from entering the eye. Plus, they have a third eyelid which can sweep across their entire eyeball to help clean away any dust and dirt. Next time you’re cuddling your kitty, see if you can spot her eyelashes!