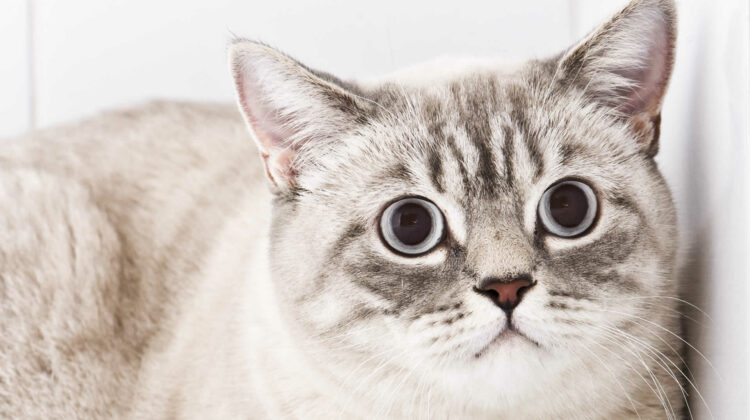 It is normal for a cat to have dilated pupils in some instances. For example, cats’ pupils will dilate at night or in low light conditions to help them see. You may also notice your cat’s pupils dilate when they are in a stressful situation or playing with their toys – this is perfectly normal!

However, if your cat’s eyes are always dilated, this usually indicates an underlying health condition. And when you see a disorientated cat with dilated pupils, you know things are pretty serious. When in combination, dilated pupils and disorientation are the signs of brain trauma or poisoning.

In this article, I will discuss these two things in more detail and other signs to look out for. Both are serious and you will need to take your cat to the vet as soon as possible if you think either applies. I’ll also discuss some other possible combinations of illnesses, particularly in senior cats, that may give the same symptoms.

What Health Conditions Have Symptoms of Disoriatenation and Pupil Dilation in Cats?

Pupil dilation and disorientation as two separate symptoms are linked to several health conditions. However, when the two are seen together in combination, there is only a limited number of health issues your cat could be facing.

In most cases, a disoriented cat with dilated pupils will have either brain trauma or have been poisoned. Both are serious and both need rapid medical attention before their condition becomes worse. Here is a closer look at each medical condition, other signs to look out for, and what you should do next.

Brain trauma is devastating and often fatal in cats. This refers to any damage or injury to the brain that affects its function. Therefore, there are many causes of brain trauma, which include:

As the brain controls the function of the entire body, the clinical signs may vary depending precisely where on the brain the injury has occurred and how much of the brain has been affected. Moreover, where the brain trauma is caused by a head injury there may be physical signs of injury, whereas other causes won’t be as visible.

One of the most typical signs to look out for is disorientation. If your cat did sustain a head injury they will likely be concussed, acting very confused by their surroundings. Other types of brain trauma can also lead to disorientation, looking dazed, and acting abnormally.

Abnormally sized pupils that don’t react well to light is another common sign. This is usually down to the injury resulting in reduced blood flow to the brain stem and inadequate blood flow to certain parts of the brain. Commonly, both pupils will be large and dilated. In other cases, cats that have sustained a brain injury will have different-sized pupils, one being larger than the other.

A disoriented cat with dilated pupils that is suffering from brain trauma may also show some of the following symptoms:

If you notice any of these signs of brain trauma, you need to call your vet immediately. Your cat’s brain controls all of its vital functions and it needs to work effectively for your cat to survive. As such, they need immediate hospitalization.

The vet will try to correct the underlying cause of the injury. In some cases, this may require brain surgery. In others, helping the brain to get enough oxygen, balancing blood sugar levels, or correcting your cat’s blood pressure can reverse the damage.

After your cat is back home, it’s your job to make their lives as stress-free as possible. As long as your cat’s condition doesn’t deteriorate in 48 hours post-trauma, they’re likely to make a full recovery. However, this can take over six months depending on the severity. During this time your should:

Alternatively, a disoriented cat with dilated pupils may have been poisoned. This happens when a cat ingests a toxic substance that damages the body. Many everyday items lurking in your home can cause poisoning, including:

If your curious cat has managed to gets its paws on something it shouldn’t, the onset of symptoms will happen quickly. The precise symptoms will vary depending on which toxic substance has been touched or consumed. However, disorientation and pupil dilation are common.

For example, chocolate is known to cause disorientation when eaten by cats. This is due to the toxic substance affecting how things are absorbed in the gut and causing a drop in blood sugar levels. Other poisonous substances can also affect the central nervous system, causing cats to stumble around while acting dizzy and confused.

An example of poisoning that causes dilated pupils is that of insecticides and flea treatments, specifically pyrethroid-based products. This is down to the toxin affecting your cat’s central nervous system, causing the pupils to increase in size.

Having affected the nervous system, a disoriented cat with dilated pupils is common for many types of poisoning. You may also notice other common symptoms, including:

Poisoning is another medical emergency and needs prompt treatment from a vet. Even if you only suspect poisoning but aren’t sure, it’s better to be safe than sorry. The symptoms often come on very quickly and waiting it out to see if they go away could be fatal.

If you know what your cat may have come into contact with, take a sample or the product label to the vet. This will enable them to work out what medication is best for that particular poison and help to flush it out. As soon as the poison is out of your cat’s system, they should make a full recovery.

It is important to never try and help remove the toxin at home by attempting to make your cat vomit. Instead, remove the toxin away from your cat and put it in a secure location. After your cat is has received care, be sure to keep all dangerous substances in a sealed container and in a closed cupboard to prevent poisoning in the future.

Other Reasons for a Disoriented Cat with Dilated Pupils

It is not unheard of for cats, especially senior felines, to suffer from several health conditions at once. Therefore, a disoriented cat with dilated pupils may be suffering from two conditions: one that is causing their eyes to dilate and another that is causing disorientation. It could be just by chance that the onset of both symptoms occurred at once!

Are your cat’s eyes always dilated and don’t restrict in response to bright light? If so, the most common cause is hypertension. However, constant dilation can be due to loss of vision, or, although rare, feline dysautonomia. When your cat’s eyes are dilated more than usual but not constantly, more likely causes include stress, anxiety, and chronic pain.

In terms of disorientation as a symptom, this is most commonly a sign of feline cognitive dysfunction often seen in older cats. Feline vestibular disease affects the ear and can cause loss of balance and stumbling. Seizures and FIP are also known to cause disorientation in cats.

Therefore, it could be that your cat is suffering from a combination of these conditions. This is more likely to occur in older felines who commonly suffer from cognitive dysfunction and loss of vision. However, any combination is possible! Take your cat to the vet for full diagnosis and treatment.

If you see a disoriented cat with dilated pupils it can be a challenge not to panic. Both are signs that something is wrong, but you simply need to stay calm and book an emergency appointment with your vet. They’ll be able to perform tests and diagnosis, providing treatment for whatever condition – or combination of conditions – your cat is dealing with. With the right care, your cat will hopefully make full recovery!