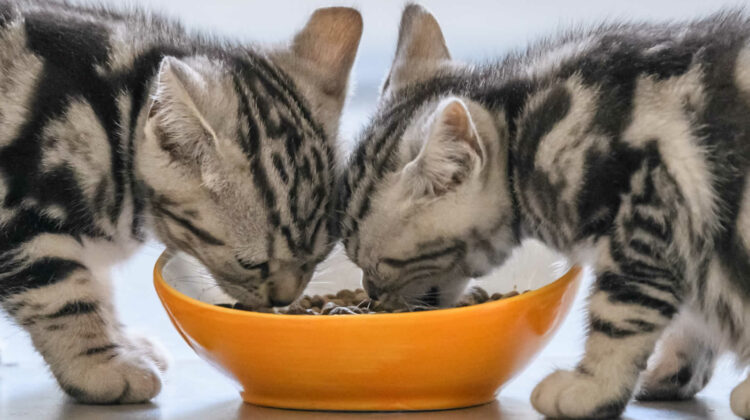 Cats are quirky and unpredictable creatures! I constantly look at my cat’s behavior, trying to figure out what it means and what she is trying to communicate. From understanding their tail movements to why they make biscuits, these quirky qualities are what makes cats so endearing.

One behavior I have picked up on recently is that my cat shakes her head when eating. This got me wondering the reason: Is this normal cat behavior? Or is this something I should be worried about?

Most of the time, a subtle head shake from your cat as she eats indicates enjoyment. However, it can also signal they’re having difficulty chewing, potentially due to dental issues. If the shake is more severe and your cat is trembling while eating, hypoglycemia is a more likely explanation.

In this article, I run through these three reasons for this behavior and other possible theories. I also touch on other causes of head shaking in cats if your cat is shaking their head all the time.

Reasons Why Cats Shake Their Heads When Eating

The top answer to the question is that they’re having some difficulties with getting their food down. The type of issues they’re having with eating depends on what type of cat food you feed them.

If you feed your cat wet food, they’ll usually be able to gobble it down no problem. However, cats will often tilt and shake their heads when they are pressing down hard using their teeth. This usually happens when a cat is eating dry kibble that they are struggling to chew.  Head tilts show extra force is going into chewing this mouthful.

On the other hand, if you are feeding your cats larger pieces of meat, they’ll sink their teeth into it before pulling away and ripping off a bite. Sometimes, despite their sharp teeth, this bite doesn’t come away as cleanly as possible. By shaking their head, they help their bite detach from the main piece of meat or fish.

There is also the chance that your cat is having difficulties eating as they are suffering some form of dental issue, such as gingivitis, painful swollen gums, or tooth cavities. These conditions are all pretty common in cats, with resorption lesions causing tooth loss in 28%-68% of all adult cats.

All dental issues cause some form of mouth pain which can make eating very uncomfortable. This can cause a decrease in appetite and reluctance to eat, along with weight loss. However, when your cat does eat, they may shake their head in discomfort and to help them break down their mouthful into smaller pieces without using as much pressure with their teeth and gums.

You’ll usually be able to tell if your cat is suffering from a dental issue by looking inside their mouth for swollen red gums. Depending on how severe the issue is, their gums may also bleed. As mentioned, a loss of appetite and associated weight loss are also common, along with bad breath and pawing at their teeth or mouth.

If you think your cat has dental disease, take them to a vet. Dental issues are best prevented as once tooth damage starts it is progressive. Your vet will be able to clean the plaque away from your cat’s teeth and remove any teeth with cavities that are causing unnecessary pain.

Have you ever seen cats eat small prey in the wild? They will of course start by stalking and hunting their prey. However, they don’t immediately eat it after catching it. Instead, they start to play with it, batting it between their paws and holding it in their mouths before shaking their head back and forth.

Although this might all look like fun and games, this shaking of the head serves an important purpose. The motion first stuns and then breaks the necks of their prey – they are quite literally shaking these small mice and birds to death. It also helps to loosen the feathers of birds so that the cat can get better access to the meat underneath.

If you haven’t seen a cat hunting in the wild like this, you have probably witnessed the same kind of sequence when playing together with your cat. This is natural feline predatory behavior that always follows the same pattern: stalk, pounce, play, kill.

Of course, playing with toys is just for fun, but the purpose of hunting in the wild is for food. Therefore, it is instinctive for cats to play with their food before they eat it. If a cat shakes its head when eating, this could be attributed to this learned behavior that’s been passed on down years of evolution. Your cat will likely not shake their pet food to death, but a little shake of the head is hard to resist when it’s hardwired into their DNA.

As cats shake their heads when eating their prey in the wild, many believe they would only do this within a domestic environment when there is a truly mouthwatering meal in front of them. This is usually easy to spot as your kitty will quickly gobble their food down and act happy and jolly.

If you feed your cat several different types of cat foods – such as wet food in the morning and dry kibble in the day – watch to see if they always shake their head when eating. If they only shake their head in approval when eating one type of food, they probably prefer this type.

On the contrary, others believe that a cat shakes its head when eating to show disapproval, just as we shake our head when saying “no”.

Therefore, this could be their way of saying they don’t like what you’ve served up for dinner. It’ll be pretty obvious if they think this – your cat will walk away from their bowl and refuse to eat.

It is quite common for cats to turn their nose up at their dinner and they are known for being finicky around mealtimes. For example, cats like running water and often refuse to drink from a stagnant bowl. My cat paws at her water bowl to try and get the water moving! And just as cats can be fussy with drinking, the same is true for food.

Now, headshaking is not a natural cat behavior as our feline friends don’t have the same behaviors and mannerisms as us – far from in fact! However, there is evidence that cats can mimic human behaviors. In one study, a cat correctly copied her owner in touching a box with her paw or face 81% of the time. As such, your cat could have learned this “no” headshake from watching you and other people in your home.

This needs more scientific evidence to back it up, but it is a funny idea that our furry friends are copying us! Imitation is the ultimate form of flattery, so take it as a good thing. But maybe try switching up your cat’s food and find an option she enjoys the taste of!

A headshake while eating is usually not much to worry about. However, if you see a cat trembling while eating this usually indicates a condition called hypoglycemia. This is where your cat’s blood sugar levels become dangerously low, causing them to feel faint and start to tremble. These low blood sugar levels cause other symptoms too, including restlessness, disorientation, and seizures.

Hypoglycemia often occurs after extended periods of fasting, which is partially why it is so important to never leave longer than 12 hours between meals. Likewise, long periods of rigorous exercise can cause a cat to deplete their glucose supply, which brings on hypoglycemia.

The following underlying medical conditions can also lead to this symptom:

If your cat is hypoglycemic, you will need to see a vet for diagnosis and treatment. Glucose will likely be administered to help their blood sugar levels return to a healthy amount. Where it is caused by an underlying medical condition, your vet will also recommend treatment for this.

Why Else Do Cats Shake Their Heads?

In this article, I have covered all the possible reasons why a cat is shaking its head when eating. But what if they’re shaking their head all the time, even when not eating?

Here is a quick look at some of the explanations:

The above suggestions are not the only reason why cats keep shaking their heads, but they are the most common. If in doubt, take your kitty to the vet and they’ll be able to offer advice. Moreover, remember that only excessive headshaking is abnormal – a little shake here and there is perfectly normal behavior.

As you can see, the answer isn’t simple! But as long as your cat isn’t showing any other symptoms, don’t worry about this behavior – we may have to accept that this is one of the curious feline habits we just don’t understand.

However, if your cat does have signs of hypoglycemia or dental issues, book an appointment with the vet. Moreover, if your cat is showing a reluctance to eat you’ll need to try gradually changing to new cat food that they prefer. Again, your vet is the best bet if you need any recommendations or want peace of mind that this isn’t related to another underlying medical condition.