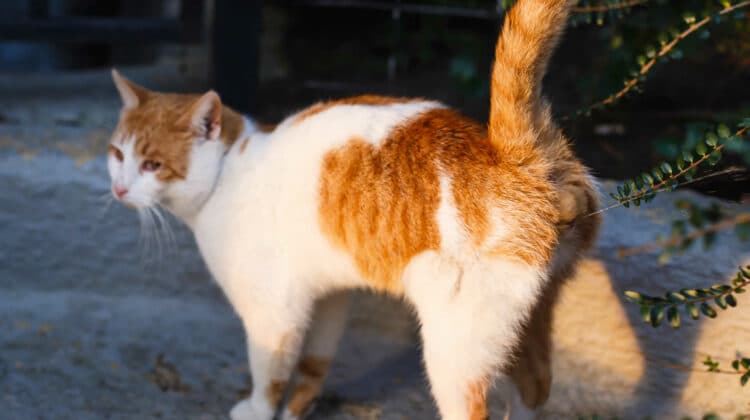 When cats spray, they stick their tails high in the air and they start to quiver before the urine is released. As a cat owner, seeing your cat shaking its tail in your home isn’t often a welcome sight. The last thing you want is your kitty shooting urine up your walls or on your furniture!

When your cat shakes its tail but doesn’t spray, this is known as cat phantom spraying. Your initial feeling is to breathe a sigh of relief – no cleaning up urine today! But after this relief has subsided we are left with another feeling: confusion. Why is my cat shaking its tail but not spraying? Is my kitty broken and unable to urinate? Should I be worried?

As cats shaking their tails can mean a variety of different and opposing emotions, I will run through all the above reasons in more detail throughout this article. This way, you’ll understand what message your feline is trying to get across and give them what they need to live their best lives!

Why Do Cats Phantom Spray?

Cats spray to mark their territory, releasing urine full of chemical messengers called pheromones. These pheromones can be detected by other cats and signal that this area is your cat’s territory. Therefore, cats spray not to be annoying or as they are acting out, but rather as an instinct.

However, when a cat is shaking its tail but not spraying, this action seems pointless. If no urine is released, what is the point of phantom spraying?

Usually, phantom spraying can be put down to one of three reasons: either your cat is very excited, feeling anxious and stressed, or simply never learned to spray properly as a kitten. Let’s take a look at each of these in more detail…

1. Your Cat is Excited

The most likely reason why your cat is shaking its tail but not spraying is due to excitement. When cats are excited, their tails will often quiver and vibrate. Cats will usually only shake their tails in response to situations they find exhilarating, such as:

In these cases, your cat shakes its tail in small, quick, vibration-like motions. They can do this in any position. Perhaps they are sitting on the windowsill with a quivering tail while watching a bird outside. Maybe they are walking towards you as you come home with their tail erect and shaking.

Cats can also hold their shaking tail straight and walk backward into a vertical surface, which can look a lot like spraying. However, no urine will escape – they are not trying to mark their territory and so don’t need to release their pheromones.

The easiest way to tell whether your cat is shaking its tail but not spraying due to excitement is to assess the situation. Do they have a reason to be excited? Have they seen you or another family member for the first time after a while apart? Are they about to get fed or have just seen some small prey outside?

If you answered yes to any of the above questions, excitement is a highly likely explanation. In addition to a quivering tail, other signs can also indicate this feeling of elation. For example, excited cats will often make a chirping noise and their eyes will usually be glued to the exciting stimuli. These three behaviors in combination are a definite signal your cat is having a great time!

I wouldn’t be too worried if your cat shakes its tail when he’s excited. If you want to curb some of his excitement, you could try getting out your cat’s favorite toys and play together for a few minutes. This can help to blow off some extra steam, besides helping you and your furry friend form a tight bond.

2. Your Cat Feels Stressed and Anxious

Unfortunately, tail communication is complex. Just as a shaking tail can indicate happiness and excitement, it can also be a sign of stress and anxiety. Usually, a stressed cat will only shake the tip of its tail, but it can also shake its whole tail and phantom spray as a show of stress.

Cats are creatures of habit and can become stressed over the tiniest changes. What’s more, cats have a heightened sense of smell and hearing compared to humans, meaning they may pick up on changes that we are completely unaware of.

Some examples of stressful situations for cats include:

Again, the best way to tell if your cat is phantom spraying due to stress is to assess the situation. Has there been a recent change that has made your cat feel uneasy? Do any of the above examples or similar stressful situations apply? If so, your cat is probably feeling anxious.

Aside from a shaking tail, stress in cats can present in other ways. Your feline may become much more vocal when stressed, have a loss of appetite, and could become less social. Stressed cats may be more aggressive or show other behavioral changes such as not using their litter box.

If you notice your cat phantom spraying occasionally and think it could be due to stress then don’t panic. If possible, remove the stressful stimuli and your cat will soon calm down. Where this is not feasible, ensuring your cat has lots of places to hide can help them settle down at their own pace.

However, if your cat’s tail is shaking but not spraying every day due to stress, you should probably visit your vet. Your cat may suffer from anxiety and need some help dealing with it. Your vet will also be able to offer advice on how you can make your cat’s room quieter, more comfortable, and stress-free.

3. Your Cat Never Learned to Spray

No cat is born knowing how to urine mark. Yes, they are born with an innate desire to mark their territory, but how this is done they learn when they are kittens. Behaviors such as spraying are taught by a cat’s mother, other cats in your household, or even neighborhood cats outside your home.

Therefore, if you’re pretty sure your cat is trying to spray but not actually urinating, it could be that they never learned to spray properly in the first place. There are several reasons why your cat hasn’t learned this behavior, such as:

If a cat never learned to properly spray, their phantom spraying serves the same purpose as regular spraying – they are trying to mark their territory. Little do they know they’re doing it wrong! As an owner, I wouldn’t worry about this as the last thing you want is your cat urinating in your home.

Besides, there are plenty of other less messy ways a cat can mark its territory. For example, you may see your cat rub its face and body on things. By doing so, your cat is transferring its unique-smelling pheromones from itself onto the object, marking it as “theirs”.

Cats also mark territory by scratching. Gland on your cat’s paws release pheromones which are again transferred into the object they are clawing at. To save your furniture from kitty claws, I advise getting a cat tree or scratching post that you don’t mind your cat digging its nails into.

You may also notice that cats act weird when you scratch the base of their tail, which can be another way of spreading scent and marking territory. But this time, they could be trying to spread their pheromones on you and mark you as their own! Take this as a sign of love and affection and an indication that your kitty views you as a member of the family.

In addition to marking territory, unneutered male cats are frequent sprayers as they are trying to attract females in heat. If these cats never learned to spray, their phantom spraying could be an unsuccessful attempt to attract a lady. On the other hand, neutered male cats may phantom spray as they no longer have the desire to mate but their spraying has become a habit.

Shaking their tails and cat phantom spraying is just one of the many tail movements pet owners may observe. Cats move their tails in all kinds of ways as a means of expressing their emotions, similar to how a dog wags its tail when it’s happy.

As such, paying close attention to your cat’s tail position can give you great insight into how your cat is feeling. Further, their tails can be indicative of certain illnesses and diseases. Here’s a brief look at some other common tail positions and what they mean:

Cats use their tails as a form of communication and the quivering caused by either excitement or anxiety is often mistaken for the tail shaking associated with spraying.

In other cases, it could be apparent that your cat is trying to spray but no urine is coming out. In these scenarios, they are likely attempting to mark their territory or find a mate, but never learned how to effectively urine mark in the first place. If your cat has just been neutered, this fake spraying could simply be a learned habit.

No matter the reason, spraying is not a welcome behavior for domestic cats. It’s frustrating for owners constantly having to clean and makes your house stink! So, don’t worry that your kitty hasn’t got this behavior quite right – be thankful they aren’t making a mess of your home!