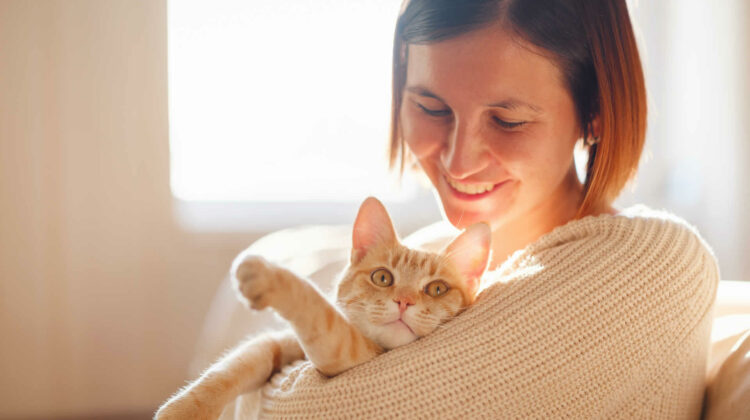 Some cats are more vocal than others, but mine? She’s a right chatterbox! She always seems to have something to say to be or some demand that needs to be met. My cat meows at night when I go to bed or meows when I sneeze… In all honesty, there are few situations where she doesn’t meow!

Recently, I have noticed my cat meow when being handled. Usually, cats meow when they want something specific from their owners. So, why does my cat meow when I pick her up? Does she love it or hate it? Is she injured or sick? What is she trying to tell me?

I did a lot of digging and it turns out there is no simple answer to the question. In fact, I found nine reasons why cats meow when being picked up. To solve the mystery, have a read of them down below and see which you think applies to your kitty.

Why Do Cats Meow When Being Picked Up?

Cats save their meows to exclusively communicate with humans. I often hear my cat meow when I come home from work every day. It’s usually a soft and gentle meow and is her version of saying “Hello”. Cats use their meows as greetings in this way when they’re pleased to see you. Take it as a sign that they’re glad you’re there.

Some cats love being picked up by their owners and use the opportunity to spend some quality time together. They know that they’ve got your full attention while in your arms, and they meow to show their excitement about being there. They simply love your company and can’t wait to tell you how happy they are!

Vocalizing when happy is no new thing. Cats purr when you pet them to show pure contentment, and meow when you arrive home from work to express joy. Therefore, it shouldn’t come as a surprise that some cats meow when they are picked up as they love the attention. Extremely happy cats might even trill with happiness.

You’ll be able to tell from your cat’s body language that they’re a fan of being held. Cats that are content won’t put up any fight or try to escape. They’re happily sit in your arms and nuzzle as close to your as possible. Their bodies will also be relaxed.

Once you’ve been holding your cat for a while, they might even start purring to further express contentment. Cats act weird when your scratch the base of their tail out of enjoyment too. Pay attention to all the signs and it is easy to work out how your cat is feeling.

3. They Hate Being Held

Unfortunately, not all cats like being picked up. Being held is a pretty vulnerable position for a cat to be in. If they don’t trust the person picking them up, they’ll probably hate it! So if you’re picking up random cats or have just adopted a new one they might not trust you enough to be held.

Even when there is trust there, some cats simply won’t like being held. All cats have completely different personalities and some are more independent than others. These kitties prefer not to be manhandled, even by their owner who they love and trust. They just want to do their own thing.

So, how can you tell if your cat hates being held? Body language can be used as an indicator here. Cats that hate being picked up will try to wriggle free immediately and their body will be tense. Their meow will be louder, shorter, and more urgent as well, while their ears will be flat against their head and pupils dilated.

4. You’re Picking Them Up Incorrectly

It is also possible that you are picking your cat up incorrectly. Their meow is their way of trying to communicate to you that you’re doing it wrong. Even cats that usually love being held might meow and squeak if you handle them incorrectly, so make sure you’ve got the technique right.

To pick your cat up the right way, you need to make sure you’re supporting their whole body. This might mean scooping their back legs onto your arm and supporting them. If your cat doesn’t feel secure in the position, it’ll panic and try to get back down to safety. A great tip to remember is that the more points of contact between you and your cat, the better and more supported they’ll feel.

When first grabbing your cat, I also recommend going slowly. Catching a cat off guard can make them want to be put down immediately. By going slowly, you also have a proper chance to make sure you’re supporting their entire body before scooping them up into the air.

Your cat might also meow when being picked up as they are sick or in pain. Most illnesses will cause behavior changes and most cats will become more irritable. Even cats that previously loved being picked up by their owners might now meow when sick or injured. They’re trying to tell you that something is wrong.

There is also a chance that you’re hurting them more by picking them up. For example, a sick cat might have a stomach ache. Scooping them up from the belly will make them feel even more nauseous! Another example is arthritis or joint injury. Depending on where your hands are on the body, you could be putting pressure on their sensitive areas and making your cat uncomfortable.

It is important to listen to your cat’s wishes and put it down ASAP. Cats can become aggressive if they are in pain, even towards their owners. I’ve had my cat bite me when I pet her once, and it turned out I was causing pain to an unknown injury. You’ll want to avoid this, so avoid picking your cat up while they recover from their illness or injury.

Bear in mind that cats are masters at hiding pain, so subtle behavior changes might be the only indication that something is wrong. It might be worth taking your cat to the vet if you think something might be up. Definitely get them in for a checkup if you notice changes to appetite, unexplained weight loss, and/or increased lethargy.

Cats that are stressed or anxious also meow when being picked up. My cat’s meow is weak and raspy whenever she is stressed, which is a good indicator. They’ll also have a gloomy disposition and are usually more withdrawn. However, some cats will become overly clingy and affectionate when stressed.

Although many people don’t realize it, cats are very sensitive creatures. Even the smallest changes in their environment or routine can make them feel on edge. This might be something as little as a strange guest coming over, to something bigger such as moving to a new home. Other examples of stressful situations include:

If you think your cat is stressed, you can remove the stressor and see if it helps. But sometimes this isn’t possible! Allow your cat time to adapt to the change and retreat if they want to. Try not to make any more changes while your cat is overcoming the initial stressor either. When you make changes in the future, be sure to introduce them gradually.

For example, my cat is always hungry and meowing for food. If I tried to ever pick her up while she was eating, there’s no way she’d let me. She’d meow and kick up a fuss immediately. She’s eating right now and isn’t after cuddles. “There’s a time and a place,” she says. “And it isn’t now!”

Eating is just one example of an activity you have interrupted. Perhaps you disturbed your cat while they were sleeping. Maybe they are busy playing with their toys when you scooped them up. They might be scratching their cat tree or climbing to the top of it. It doesn’t matter what the activity is – if you interrupted your kitty, they’re going to tell you about it.

Do you have an unneutered female cat? If so, there is a chance that your cat is in heat. Heat can cause a range of behavior changes in females – some will become more affectionate whereas others become more aggressive.

As such, cats in heat might meow when you pick them up as they are feeling content and love the extra love and affection. On the other hand, they might be more irritable and meow to be put back down. They’re busy searching for a mate, and you’ve just interrupted them! You can use their body language to work out which one applies to your cat.

When in the estrus cycle, females also become a lot louder in general. If you’re wondering “Why does my cat meow at the door?”, it could be that she’s calling to nearby males and wants to get outside and meet them. Cats in heat also rub themselves on everything to spread their scent. They also groom their genital area excessively and assume the mating position.

Some of these behaviors can be pretty hard to live with, particularly the yowling mating calls to males. You might want to consider getting your cat spayed if you’re finding it unbearable. The operation is only minor, and you won’t have to worry about unwanted pregnancies either.

Finally, your cat might simply be meowing for the sake of it. Some cats are extremely vocal and love chatting with their owners. There isn’t anything, in particular, our cat is trying to communicate. Instead, they’re simply nattering away and enjoying their time with you.

This is completely dependent on the personality of your cat. Like I said already, my cat meows all the time – she’s such a chatterbox! But I have cats before that only meow when something serious is wrong. You know your cat best, so you should be able to work out whether they’re being overly friendly or whether they’re trying to tell you that something is wrong.

As you can see, the question “Why does my cat when I pick her up?” doesn’t have a simple answer. Cats use meows to communicate with people, and there are a whole host of things that your cat could be trying to tell you. From enjoyment to hatred and everything in between, you need to use other indicators to work out what your cat is thinking.

As long as you are picking up your cat correctly and respect their limits, keep doing what you’re doing. Remember though, meowing can be a cat’s way of saying they’re in pain. Felines are masters at hiding pain, so take these signs seriously and call your vet if at all in doubt.