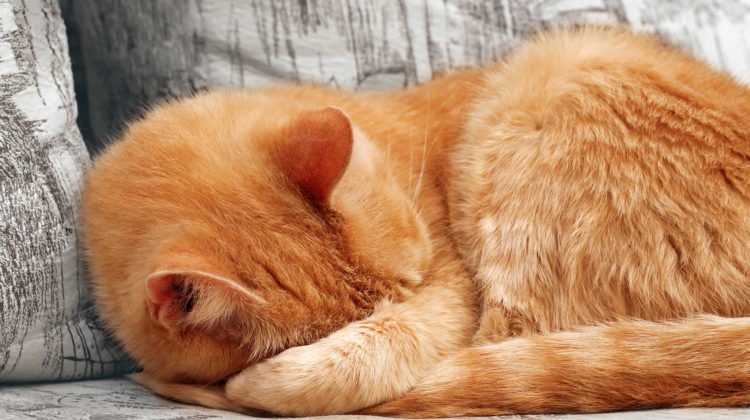 Cats are undeniably adorable! However, there is little that’s more endearing than watching a cat in a peaceful slumber. They always seem to contort themselves into a range of interesting positions, from curled up in a ball to sprawled out across your couch. You may have noticed that no matter which position they assume, cats nearly always sleep with their paws or tails over their faces.

While covering their eyes is cute as can be, what is the reason for this? Why do cats cover their faces when they sleep? Interestingly, it is usually because it helps to keep them warm and cozy. However, there are plenty of other possible explanations too! They could be blocking out the sunlight or noise, feel more safe and secure in this pose, or simply find it the most comfortable position to lie in.

In this article, I will run through all these reasons in-depth, plus offer more explanations as to why cats cover their faces when they’re asleep. This way, we can better understand our cats’ curious behavior and fall in love with them even more!

Why Do Cats Cover Their Faces When Sleeping?

The most probable reason your cat is covering its face while sleeping is for warmth. When sleeping, cats will lose more body heat than usual as they are lying still. Most of the heat lost will be from their extremities such as their paws, ears, and the tip of their noses.

By covering their faces with their paws or curling up tightly into a ball they can reduce the amount of heat that is lost as they sleep. You may also see your cat faceplanting and sleeping entirely face down. This has the exact same effect and helps to keep their body heat inside, comparable to how we curl up tightly to sleep on a cold winter’s night.

Your cat is more likely to cover its face to help retain heat on colder days, whereas in the hotter summer months your cat will more likely be stretched out. Cats curl up instinctively when it’s cold as it can be dangerous for them. If their body temperature continues to drop they can get hypothermia. In worst cases, this can lead to coma and death.

Setting your thermostat to a temperature that cats like can keep them happy and snug all year round, even when sleeping. However, if your cat is still sleeping covering its face on a boiling hot day or when your house is at the optimum temperature for cats, you can rule warmth and coziness out as being the reason why. They are probably covering their faces due to another factor on this list.

2. Blocks Out the Light

If it’s a hot sunny day, you can probably rule out keeping warm as the reason for your cat covering its face as it sleeps – your cat is likely warm already! However, it may be doing something else: blocking out the light from the sun.

Cats are crepuscular creatures, which means they are most active during dusk and dawn and spend most of their days sleeping. This means they often have to sleep when it’s light outside and use their paws to cover their eyes and block the light.

While you may think that cats love sleeping, period, and can happily get some shut-eye anywhere at whatever time of day, it’s not strictly true. Just as humans sleep better in the dark, so do cats. By blocking out any light by using their paws, they are giving themselves a better chance of a good catnap. It is in effect the same as us shutting our curtains or blinds before bed.

You may be wondering why your cat has chosen to sleep in the sunshine. After all, if they sleep better in the dark, why not laze in a dark room or corner instead of the hot and direct sunlight? This again goes back to body temperature. For cats, the temperature of a room is much more important than the light levels. Cats like being warm and would prefer to sleep in the hot sun and cover their eyes with their paws than in a cold yet dark room.

3. Blocks Out the Noise

Light isn’t the only thing that your cat could be blocking out when it’s sleeping. Your cat could also be burying its head when it sleeps to block out noise, another factor that could be detrimental to your cat’s slumber.

How likely your cat is to be woken up from a loud noise depends on how deep of a sleeper your cat is. With that being said, cats are typically jumpy creatures. For most felines, even the slightest noise could keep them awake. This is linked to survival, as in the wild cats need to snap awake at the slightest noise. It could be a sign of danger, and they may need to flee quickly!

However, in our homes, this threat isn’t there and so cats may wish to block out the disturbing noises. Your cat may use its paws to cover its ears, or your cat could sleep with its head buried into something to block out the noise. It is crucial that you can differentiate this sleeping from head pressing, which is when your cat presses their head up against something in response to pain. The former is fine, but see the latter and it’s time to call a vet!

Your cat could also be sleeping with its face covered for a sense of security. Although cats are predatory creatures and hunt mice, birds, and other small rodents, in the wild cats are also the prey of many larger animals. When asleep, cats are at their most vulnerable as they are not alert and on the lookout for predators trying to hunt them down.

Your cat’s face is one of the most vulnerable parts of its body. If this was to be attacked while they were sleeping, their chance of survival would be slim. Although domestic cats are not going to be attacked by predators when they sleep, this behavior has been passed down through years of evolution. It is an instinct that all cats have.

Besides covering their faces, cats can also help themselves to feel safe by getting close to you. Does your cat get in your face while you sleep? Well, it is likely that your cat trusts you and feels more protected with you close by. If I let a cat sleep on my chest, I know they’re going to feel safe and secure. Plus, they love the body heat we give off which helps them to feel even more comfy and cozy.

Speaking of comfort, this could be another reason your cat sleeps with its paws over its face – they’re sleeping in this position simply because it feels good. Think of the many positions that we sleep in. How do you choose which one to lie in each night? You choose the one that feels comfiest, right? Well, the same is true for your feline.

In fact, any position that your cat assumes when sleeping likely feels comfortable and cozy, whether it be the cat loaf position, an outstretched pose, or something more contorted! And the more comfortable they feel, the better sleep they’ll get. Each of our cats will have their own opinion as to which position the most comfortable and cozy. If your cat always sleeps in the same pose with its face covered, perhaps they just love it!

However, do keep an eye on your cat’s sleeping positions. Even though each cat will have a favorite, you should still see some variety. A cat only ever sleeping in one pose could be a sign of sickness! You should familiarize yourself with all the cat sleeping positions when sick so you know what is normal and when to worry.

Your cat covering its face when it sleeps could also be the result of pure exhaustion. Think about it, you don’t only see your cat put their paws on their faces when they sleep – they also use their paws to self-groom. Cats are ferocious self-groomers and spend the majority of their day either grooming or napping. So, what happens when they fall asleep mid-facewash?

You guessed it – your kitty’s paw lands right over its eyes. In fact, spending nearly a third of the day grooming is tiring work, and so it’s no surprise our cats may become exhausted halfway through. Moving their paws down to sleep requires extra effort that our cats could simply be too tired to give.

Besides, once your cat wakes up, it will likely start grooming again. By sleeping with its paws over its eyes, the paws are in the exact right spot for your cat to finish its grooming job off.

If your cat is covering its face by burying it in an object rather than its paws or tail, there is also a chance that it could be marking its territory. While your cat is not likely marking their territory as they sleep, they may have been doing it before they nodded off, similar to how they kept in their grooming position while sleeping.

It is common for cats to rub their faces on things for this reason. They could rub their faces on people or objects. If your cat rubs against you, they may be claiming ownership! Think of it as a positive thing though. Your cat loves you enough to let the whole world know about it – aww!

Finally, your cat could be covering their face when they sleep as a signal to you, other people in your home, and any other pets that they don’t want to be disturbed. They are simply asking to be left alone, and their paws being over their eyes could be a signal for your to leave your kitty in peace. They don’t want a fuss or any attention right now, they just want some shut-eye.

I first noticed this when seeing my cat sleeping. I often go over to my kitty and start stroking her when she is asleep – after all, she looks adorable! Sometimes she will respond with purring and love the affection I give her. But others, she will move her paws up to cover her face, asking me politely to leave her be. Essentially, she’s saying “do not disturb me please!”.

If this happens to you, the kindest thing to do is let your cat have their naptime. They will come to you for some love and attention later, but for now, they’re busy catnapping.

Cats sleep in some strange positions, there’s no denying it! Yet often, they will sleep with their faces covered – be that with their paws, tails, or by burying their head into something else. And why do cats cover their faces when they sleep?

As discussed, they could be doing this for warmth, comfort, or safety. Alternatively, they could be trying to block out the noise or light for a better night’s sleep. Or perhaps they are exhausted and fell asleep while grooming themselves or rubbing their faces on things to mark their territory. Maybe your cat just wants to be left alone while they sleep.

With so many different possibilities, it can be difficult to know the true reason why they’re covering their faces as they snooze. However, while we may not fully understand all of our cat’s behaviors, their quirks and curious ways make us love them even more!